Folau looks certain to be sacked by Australia for the comments.

Vunipola, who was criticised for liking the post, called for people to "live their lives how God intended" and said "man was made for woman to procreate".

The RFU said on Friday it intends to hold a meeting with Vunipola next week.

"Rugby is an inclusive sport, and we do not support these views," it said in a statement.

"We will be meeting with Billy to discuss his social media posts."

In a statement, Vunipola's club side Saracens said: "We recognise that people have different belief systems and we expect everyone to be treated equally with respect and humility.

"As representatives and role models, Saracens players have a responsibility not only to themselves but to the club and wider society.

"Billy Vunipola's recent social media posts are inconsistent with this and we take this matter very seriously. It will be handled internally."

Rugby Australia and New South Wales Rugby Union held a private meeting with the full-back in Sydney on Friday, having previously been unable to contact him and said afterwards their position on the 30-year-old's future was unchanged.

Social media users criticised Vunipola after noticing he had liked the post, and the Australia-born 26-year-old responded in an Instagram statement on Friday.

"So this morning I got three phone calls from people telling me to 'unlike' the Izzy Folau post," he wrote.

"This is my position on it. I don't HATE anyone, neither do I think I'm perfect.

"There just comes a point when you insult what I grew up believing in that you just say enough is enough - what he's saying isn't that he doesn't like or love those people.

"He's saying how we live our lives needs to be closer to how God intended them to be. Man was made for woman to procreate, that was the goal no?

"I'm not perfect - I'm at least everything on that list at least at one point in my life. It hurts to know that. But that's why I believe there's a God. To guide and protect us and forgive us our trespasses as we forgive those who trespass against us."

Vunipola has been named on the bench for Saracens' Premiership fixture with Bristol at Ashton Gate on Saturday.

Rugby Australia is set to terminate Folau's contract, just months away from a World Cup at which he would have been a central figure for the Wallabies.

"Israel has failed to understand the expectation of him as a Rugby Australia and NSW Waratahs employee is that he cannot share material on social media that condemns, vilifies or discriminates against people on the basis of their sexuality," read a statement.

Folau, who signed a four-year deal with the Waratahs in March and had a deal with Rugby Australia until 2022, escaped punishment for similar comments last year. 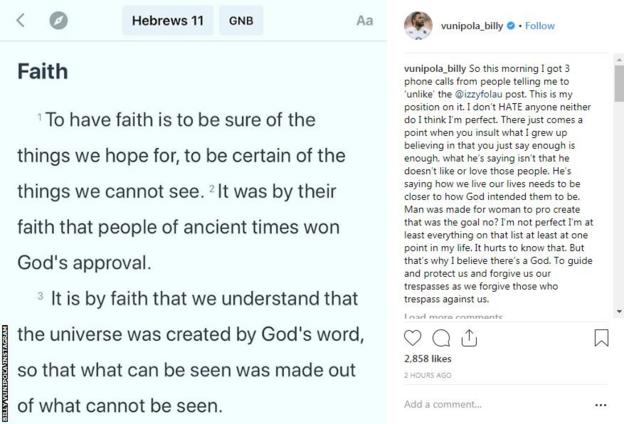