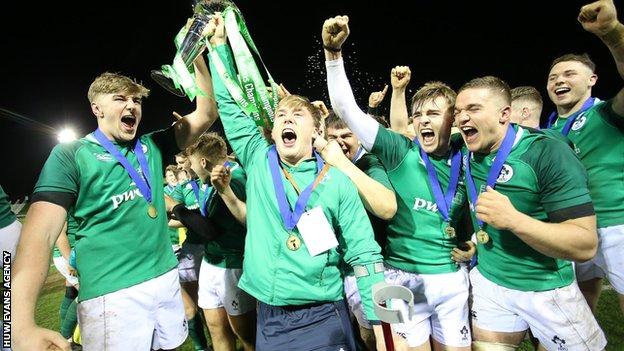 Ireland under-20s completed a Six Nations Grand Slam with a bonus point win over a gritty Wales in Colwyn Bay.

A Cai Evans penalty was the difference between the two sides at half-time after Jonathan Wren's try cancelled out Aneurin Owen's earlier score.

Dylan Tierney-Martin crossed after the break before Jac Morgan finished off a dazzling run from Ryan Conbeer.

Wales finished fourth in the table.

The hosts took an early lead at Stadiwm Zipword when Owen finished off a well-worked try by the backline, with Evans adding the extras from full-back.

Ireland responded well and twice thought they had crossed the whitewash only for the TMO to rule against them.

There was to be no doubt with Wren's effort on the stroke of half time, with Ben Healy, a late replacement for Harry Byrne, successful with the conversion.

Ireland started well after the break with hooker Tierney-Martin taking advantage of a lapse in concentration, and full-back Jake Flannery looked to have extended their lead, but a forward pass was spotted in the build-up.

Conbeer's introduction boosted Wales' attack and weaved his way through several defenders before offloading for flanker Morgan to cross.

Ireland continued to chase their Grand Slam dream and substitute Reilly, a late call up to the squad, showed his pace to cross before prop Clarkson threw himself over the ruck to put the game beyond doubt.

Wales under-20s manager Gareth Williams said: "I'm really disappointed because we were well and truly in it.

"We've got to be more clinical, not just in scoring but keeping pressure on teams and Ireland did that superbly in the last four to five minutes.

"They're a young group, they'll take a lot from this and it's about growing now towards the world cup."