Scarlets say the proposed merger with Ospreys is "off the table".

It follows a similar statement by Ospreys on Tuesday confirming deadlock on the proposed plan to reorganise Welsh domestic rugby.

As part of Project Reset the rival regions were expected to merge, with a new team created in the north of Wales.

Scarlets claim Ospreys approached them over a potential merger in December 2018 and that the proposal was set to come into force, until Ospreys withdrew at a meeting of the Professional Rugby Board (PRB) on 5 March.

"Heads of terms were agreed and signed by the Ospreys and Scarlets on 1 March on terms we believe our supporters would be happy with," Scarlets said in a statement.

"This was to be proposed at a meeting of the PRB on Tuesday afternoon, but we were told at the start of that meeting that the Ospreys had changed their mind.

"The merger is off the table."

Ospreys chairman Mike James announced his resignation on Tuesday, with the region calling for a complete rethink of the process.

"The instability created by PRB's chaotic approach to its own imposed restructuring criteria has been the height of recklessness at its worst, and incompetent management at its best," the Ospreys statement said.

The discussions between the WRU and regions have been dubbed Project Reset. Previous proposals had included merging Ospreys and Cardiff Blues, but those plans fell through.

Wales hooker Scott Baldwin says the Ospreys directors have told the players the future of the region is guaranteed. 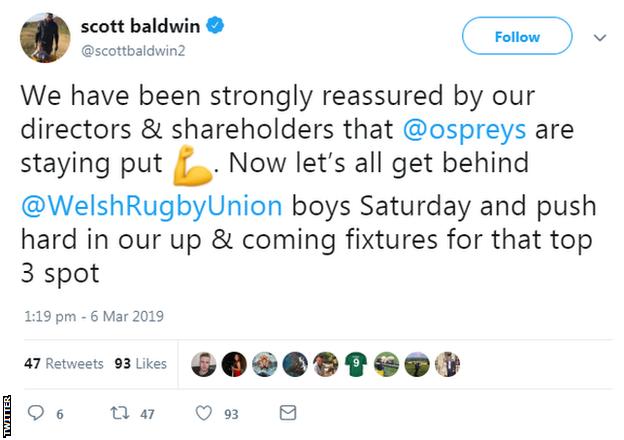 Ospreys and Scarlets are fierce rivals, and have been the most consistently successful of the Welsh regions since their creation in 2003 - having won the domestic league six times between them.

The other two regions, Dragons and Cardiff Blues, have never won the title.

The Scarlets statement claims Ospreys instigated the merger talks, and it was their suggestion that led to the proposal for a region in North Wales.

"In late December, the Scarlets received a high-level approach from the Ospreys to explore the option of a merger as they had come to the conclusion that their position as tenants at the Liberty Stadium was proving to be challenging," the statement continued.

"This was discussed at the two-day strategy meeting of PRB on 8 and 9 January.

"The loss of a region would have put Welsh rugby in breach of its commitment to having four regions playing in the major competitions. As a result, the option of a team playing out of North Wales was raised.

"By the time of the next PRB meeting on 5 February, discussions had broken down between the Scarlets and Ospreys, and we were told that the Ospreys and another region were in talks over a possible merger, again with North Wales being the option to maintain four teams.

"Subsequently, those discussions also broke down and we were approached again last week by the Ospreys to reconsider a merger."

The PRB issued a statement on Tuesday, outlining its reaction to the breakdown in talks.

"The PRB wishes to put on record its disappointment at the timing and the uncertainty that this has caused players, staff, coaches and the Welsh rugby public.

"We are reunited in its pursuit of what is best for professional rugby in Wales."

Incoming Ospreys chairman Rob Davies on Wednesday said he would be pressing on the WRU and PRB to provide a clear timetable for Project Reset.

"It's hard to look at this situation and not conclude that a stitch-up of convenience has just unravelled before us all," said Davies.

"It's now time for the grown-ups to get back in the room."

Meanwhile Members of Parliament and Assembly Members from the Ospreys region have written to WRU chief executive Phillips.

They have called on him to "look at all possible avenues and do all you possibly can" to prevent the Ospreys from going out of existence.

The letter has been signed by Aberavon's Stephen Kinnock MP and David Rees AM, Gower's Tonia Antoniazzi MP and Rebecca Evans AM, Neath's Christina Rees MP and Jeremy Miles AM, Swansea East's Carolyn Harris MP and Mike Hedges AM and Swansea West's Julie James AM.

"It seems astonishing that the outcome of restructuring the regional game in Wales could result in the most successful region ceasing to exist and Wales' second city failing to have a regional rugby side," the letter says.