A much-changed Wales side equalled their record run of 11 successive Test wins with an unconvincing victory over Italy in Rome.

Warren Gatland made 10 changes from the team that beat France and tries from Josh Adams and Owen Watkin, plus 14 points from Dan Biggar, sealed victory.

Wales will break a record set in 1910 if they beat England in Cardiff on 23 February.

Former England scrum-half Matt Dawson had described Wales' alterations as risky, despite the opposition, although Gatland had made as many last year when Wales defeated Italy 38-14 in March to start the current run of wins.

Not many of the new Wales inclusions in this experimental side made compelling cases to start against Eddie Jones' side in two weeks, although Wasps flanker Thomas Young impressed on his Six Nations debut.

Josh Navidi was named man of the match after moving to number eight with Ross Moriarty dropping to the bench, alongside usual captain Alun Wyn Jones.

Italy have now lost a record 19 matches in this tournament with their last victory coming against Scotland in February 2015.

Seeking a first home win since beating Ireland six years ago, the hosts made a terrible start when hooker Elliot Dee forced a turnover penalty and Biggar opened the scoring after 62 seconds.

But for all Wales' pressure, Italy scored the first try after capitalising on a sliced Adams kick. The decision to turn down a kick at goal and opt for an attacking line-out was justified when Steyn eventually burrowed over.

Tommaso Allan converted and Wales led only 12-7 at the interval.

With Italy's driving line-out proving their most effective weapon, Wales' discipline let them down at the start of the second half and Allan slotted over a penalty to reduce the gap further.

Wales' attack was ponderous and Gatland responded by sending on squad skipper Alun Wyn Jones alongside Dillon Lewis after 50 minutes.

But Biggar missed two kicks in the space of a couple of minutes as Wales failed to build any momentum.

The mediocrity finally lifted when scrum-half Aled Davies launched a break from a scrum down the right-hand side. When the ball was switched left, full-back Liam Williams sliced through the Italian defence to set up the try for Adams in one of the only cutting line breaks Wales produced.

Centre Davies thought he had scored Wales' second try after following up his own chip kick, but he fumbled the ball in the act of scoring.

The second score did come when centre Watkin dived on to a clever chipped Gareth Anscombe kick to score the visitors' second try.

Italy responded with an incisive Allan break to set up Padovani to score before Young was denied a deserved try with the final move of the match because of an earlier forward pass.

That summed up Wales' day - another chance gone astray because of poor execution.

A record-equalling win it might have been, but Wales will know they require a much improved performance if they are to beat England and become history-makers in two weeks.

Defeat England on that day at the Principality Stadium and this Rome trip will soon be forgotten.

Man of the match - Josh Navidi 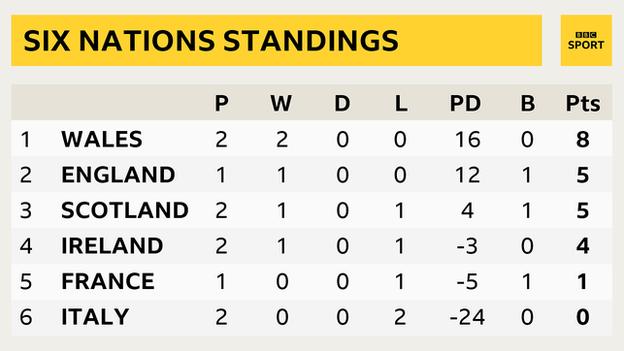 737 comments
Back to top
unknown