Once-capped Wales wing Luke Morgan crossed for a hat-trick as Ospreys cruised to a 43-0 win over Zebre in the Pro 14.

The former sevens star showed his finishing skills to earn the bonus point with 11 minutes to spare.

A penalty try and late scores from Scott Otten and Olly Cracknell completed the rout.

Meanwhile centre Scott Williams made his first appearance since early September after a hamstring injury, putting in a lively hour's display despite his lay-off.

A penalty try broke the deadlock after 23 minutes as Zebre collapsed an advancing scrum five, after Owen Watkin's break took the home side onto the attack.

Morgan squeezed in with a diving finish at the corner flag as the Ospreys found some width after 32 minutes, but a Davies penalty was the only other score of the first half with the dominant home side leading 15-0 and visitors' hooker Massimo Ceciliani sin-binned in the 40th minute. 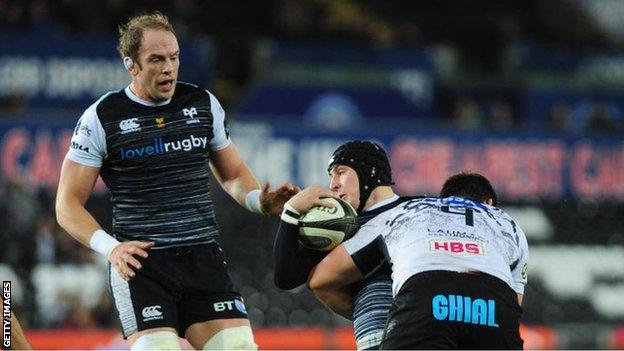 The Ospreys made heavy weather of adding to their tally, as a string of TMO reviews ruled out near-scores from record-breaker Jones and winger Morgan, and a touch-down by scrum-half Aled Davies after a forward pass.

But man-of-the match Morgan popped up on the right for his second try after 57 minutes, Davies providing the huge scoring pass and the angled conversion.

A delicate cross-kick from the fly-half saw Morgan race clear from 45 metres for his third and the vital fourth in the 69th minute, Davies again adding the extras.

Replacement Otten crashed over for a late fifth and Cracknell crossed with the last move, Hook knocking over both conversions to deepen the misery for the out-classed Italians.

Ospreys coach Allen Clarke told BBC Sport Wales: "Luke's quite a finisher, he's been doing that all season for us, he got plenty of touches, got himself into the game and got his rewards.

"I thought his first try was a fantastic finish, not many wingers in European rugby would do that.

"The returning internationals brought their positivity back, there are areas to improve and there was a degree of frustration in that we created opportunities we didn't take, but we were pretty pleased with the scoreboard."

Commenting on Alun Wyn Jones' record appearance, Clarke said: "Breaking new ground with 233 appearances is testament to the man and his modesty afterwards. He really signifies a lot of what we're about with his dedication, his love for the club and how he performs."