Now, with the autumn internationals over and the clock ticking down to Japan 2019, how will England, Scotland, Wales and Ireland assess their efforts?

When the dust settles, England will look back and regret not winning four out of four.

They will know they were a marginal offside decision against Courtney Lawes away from beating New Zealand. Victory would have been a huge psychological boost for Eddie Jones' squad, but even in defeat they will know that, on their day, they can produce the intensity to match the southern hemisphere's best.

They showed they can create opportunities and openings. They should have been out of sight against South Africa considering the try-scoring chances they created in the second half.

Owen Farrell switched into fly-half and fitted in seamlessly, but that was only to be expected considering his all-round excellence.

England victories did not come in the comprehensive, complete manner that Ireland's did.

There were either aspects of their performance lacking - for instance finishing off those chances against South Africa - or a failure to maintain their standards across a full 80 minutes.

Against Japan, both were true.

England need to play those games against limited opposition with more tenacity. They have to grind teams down and earn the right to play expansively.

Overcoming that psychological barrier and playing against the likes of Japan as if they were the All Blacks is particularly important to negotiating the World Cup pool stages.

He is very bright academically but some of Maro Itoje's on-pitch decisions need to be more rugby smart.

In 12 games for England this year he has given away 19 penalties. Three of those came against South Africa in the first autumn Test, when he was also shown a yellow card.

It's a measure of the stratospheric standards that he set himself over 2016 and 2017 that these little details are being held against him.

But penalty count is a crucial metric for top Test teams. He is testing himself, he is testing the referee, finding out how much he can get away and how far he can push it, but ultimately he needs to find a balance to slow the flow of penalties against him.

In 18 months in charge, Gregor Townsend has overseen some towering highs - such as the win over England in this year's Six Nations or beating Australia in Sydney - and some real lows - such as defeat by the United States and Fiji.

This autumn did not really hit either extreme.

They won games they should have won, but did not seize the chance to take the decisive steps forward that victory over Wales or South Africa would have represented.

The discussion around Scotland invariably concentrates on the likes of Finn Russell, Huw Jones, Stuart Hogg and Sean Maitland.

For Scotland to be more of a threat, we need to be talking about their forwards as much as we do their backs.

They do a decent job of serving up ball to that vaunted backline, but, at the moment, they don't offer a threat themselves. How well can they compete with the forcefulness of South Africa, England, Ireland and New Zealand?

A strong midfield runner would also provide them with a bit more variety in attack. Too often defences can set themselves up for a race to the wide areas.

The Six Nations will provide more answers. Last year they went to Cardiff in their Six Nations opener full of promise and hope, and came back on the wrong end of a 34-7 scoreline.

This year they have Italy at home first up, which should help them build into their campaign.

In the final game of their autumn series, Scotland experimented with Finn Russell at inside centre and Adam Hastings at fly-half.

The combination did not really click in a patchy 14-9 win over Argentina and Russell will surely go into the World Cup as the preferred option at 10.

Scotland need to see him play more shrewdly. His distribution can be fantastic, but his decision-making on when to throw the ambitious pass still needs work.

In the Six Nations, he took England apart with his passing. But against Ireland, his errors fatally undermined his team.

He doesn't need to change his style necessarily, he just needs to be more accurate.

England's tackle accuracy this season is 87%. Scotland have managed 88%. Ireland are at 89%.

None can match Wales' return. Warren Gatland's side are at 90%. They are full of confidence after nine successive wins and a lot of that run comes down to their claustrophobically tight defence.

During their current winning streak, they have restricted opponents to an average of 13 points a game. That sort of frugality means they will have a chance to beat anyone.

He may be 33 and have 120 Wales caps to his name, but he is pushing the ceiling still higher on his personal performance. He is somehow getting even better.

The question for Wales is whether they can maintain that defensive intensity, while adding more creativity and accuracy with the ball.

They need to be able to switch from defending in a strict structure to reacting instinctively to each other in attack.

The try that Tomas Francis scored against South Africa this weekend is the sort of thing Wales need more of.

Flanker Ellis Jenkins felt defenders come off him, held onto the ball and linked with the prop to score. It looked simple but it took vision, decision-making and execution, all the things that the northern hemisphere sides are playing catch-up on.

With Sam Warburton's presence at open-side flanker, the 29-year-old found game time limited in the past. Half of his 60 Wales caps have come off the bench.

Now, after Warburton's retirement, he has his chance to shine.

Most players influence a match either through sheer weight of unseen work or a couple of game-changing moments or big plays.

But Tipuric seems to do both. He is relentlessly busy around the park, but also has the pace, ball-handling skills and breakdown knowhow to produce decisive passages of play.

When Taulupe Faletau, Aaron Shingler and Josh Navidi all get back to fitness, Wales will have a wealth of options in the back row.

What can you say about Ireland's autumn?

When they beat New Zealand in Chicago in 2016, it was an upset. Their victory over the All Blacks in Dublin this time around, while celebrated long and loud, was not a surprise.

It was an unrelentingly excellent performance that day but the autumn as a whole showed the depth of Ireland's quality.

Luke McGrath and Kieran Marmion filled in at nine, Will Addison and Garry Ringrose slotted into midfield, and the machine continued to purr.

I don't think Schmidt is ever satisfied.

He is a man of fine details and minute planning. He will be working on all the intricacies and variations, fine-tuning the wraparound options and double-team choke tackling, while attempting to iron out the few errors that remain and build more pressure on the opposition.

Tadhg Furlong forces every other player on his team to look at themselves and redefine what they are capable of.

For a tight-head prop forward, he just seems to be ever present on the field. He is involved in everything, and in a way that makes such an impact on the course of the game.

He does that while bearing all that weight in the scrum and carrying 130kg (20st 6lb) of bodyweight.

I questioned last season how many of Ireland's team would get into a World XV, given how many outstanding individuals there are across all positions.

But Furlong strolls into that World XV. Comfortably. 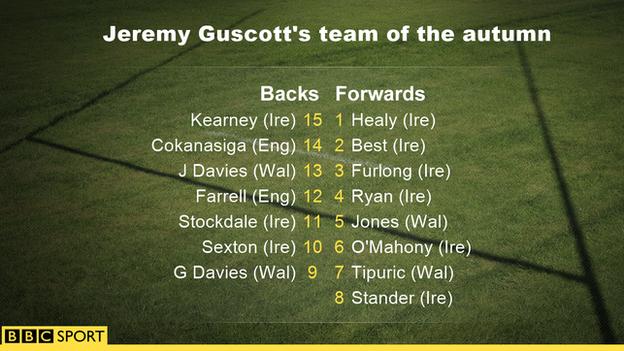