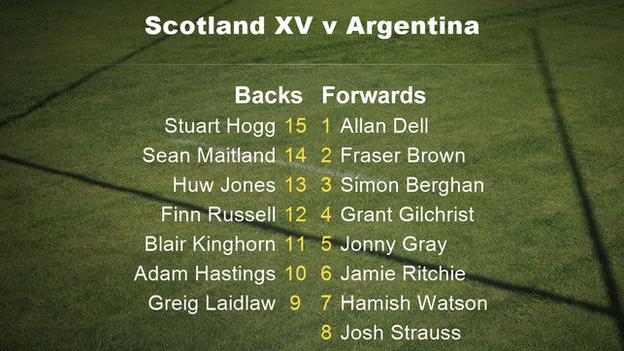 Scotland coach Gregor Townsend has made eight changes to the side to face Argentina in the final autumn Test.

The most notable switch from the team that lost to South Africa is positional, with Finn Russell moving to centre and Adam Hastings at fly-half.

Blair Kinghorn is in for Tommy Seymour.

Lions wing Seymour is not even on the replacements' bench, with cover on the wing provided by Sale Sharks' Byron McGuigan, who is in the matchday squad for the first time this autumn.

Ryan Wilson and Willem Nel also drop to the bench having - like Seymour - started all three games so far.

Sam Skinner, who has played in both the second row and back row this autumn, is among the replacements as lock Ben Toolis drops out of the 23 altogether.

Strauss is given his first start since the 2017 summer tour at number eight.

"We've been conscious of rotating the squad to enable as many players as possible to be in the best physical condition for each contest," said Townsend.

"We are expecting those selected this weekend to bring energy and huge effort to the game and seize the opportunity to perform at their best level against a very good team.

"It will be another huge challenge, not only for our forward pack, but also for our defence - as Argentina play ambitious, skilful and effective attacking rugby."

Scotland recorded a comfortable 44-15 win over Argentina in Resistencia during the summer having needed a last-minute Greig Laidlaw penalty to win 19-16 at Murrayfield in autumn 2016.