Gregor Townsend insists Scotland will "rise to the challenge" of playing South Africa after thumping Fiji.

The Scots bounced back from their opening autumn Test defeat by Wales to blow the Pacific Islanders away 54-17 on Saturday, scoring eight tries.

The Springboks, ranked two places above Scotland at fifth in the world, make the trip to Murrayfield next weekend.

"This squad has shown that when the challenge gets bigger, we get better," head coach Townsend told BBC Scotland.

"South Africa are a better team than Fiji, they play in the Rugby Championship, and came close to doing the double over New Zealand [last month].

"They bring different threats, they're playing a traditional South African game which is very strong ball-carriers, huge set-piece, excellent defence, and they have players dotted around their team who can score tries out of nothing, like we saw when they took on New Zealand.

"We have to rise to that challenge of playing one of the best teams in the world but I believe this squad can do that."

Scotland raced into a 14-3 lead against the Fijians but trailed approaching half-time after two quick-fire away tries.

Townsend was pleased with the way his players "stuck to their task" despite falling behind.

They heaped pressure on Fiji, the visitors had two players sin-binned, and Tommy Seymour scored the first of his three tries to give Scotland a lead at the interval. After the break, the hosts racked up 33 unanswered points.

"The scoreboard is a marker of how the game's going but I felt we had the upper hand in the first half," Townsend added.

"But Fiji did get two tries and were leading. Sometimes, the players will question that - what are we doing, is it working, because were not winning? But the pressure ended up telling.

"We kept on with that detailed approach around the set-piece which narrowed up the Fiji defence in the second half and allowed guys like Tommy to score tries."

Skinner 'suits what we want to do'

Exeter Chiefs lock Sam Skinner was named man of the match on his international debut. The 23-year-old made several telling ball-carries and was a prominent presence in the line-out before finishing the match on the blind-side flank.

"He did very well. The game he plays for his club and the type of player he is suits what we want to do - a decision-maker, someone that is fit, with skills that can move the ball, can carry and get around the park," Townsend said.

"Jamie Ritchie was outstanding in the back row. A lot of work went into that performance - a lot of big tackles put in on very big men, we did manage to get a few of their off-loads back on our side. Overall I was pleased with what we did defensively." 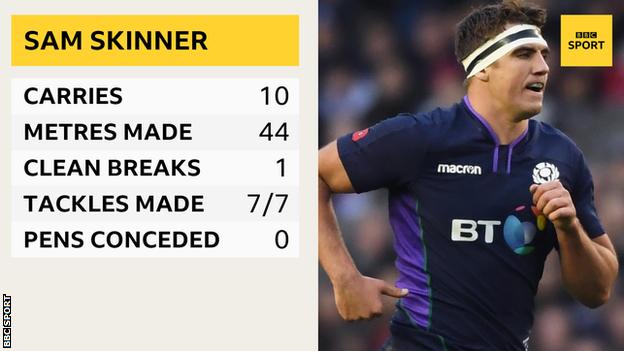