Rory Best will return to captain the Ireland team in Saturday's autumn Test against Argentina at the Aviva Stadium.

The Ulster hooker missed the summer tour of Australia with a torn hamstring but starts alongside Cian Healy and Tadhg Furlong in the front row.

Rob Kearney is unavailable so Jordan Larmour will continue at full-back following his hat-trick against Italy.

Larmour, 21, has retained his place in the starting team after veteran full-back Kearney only returned to training this week, with Munster's Andrew Conway providing cover on the bench.

"It very much is a step up but he's given us confidence on the back of some pretty big Test matches where he's come into the game late," said Schmidt of Larmour ahead of his second senior start.

"So that versatility, that enthusiasm - he's a ball of energy from back there - and that get's other people energised and hopefully we can maintain that throughout the game and give Jordan some more confidence in what is building to be a really positive introduction to Test rugby so far."

O'Brien, whose last appearance for Ireland was against the Pumas almost a year ago, will partner Munster pair Peter O'Mahony and CJ Stander in the back row.

Garry Ringrose has been ruled out of this weekend's match with a hip injury so his Leinster team-mate Henshaw will partner Bundee Aki in the centre.

Schmidt left a number of his frontline personnel at home for the eight-try thumping of the Italians but predictably recalls a host of his biggest names for what promises to be a sterner test at the hands of the Argentines in Dublin.

Connacht scrum-half Kieran Marmion has won the battle to claim the number nine shirt in the continued absence of Conor Murray, who has a neck injury, with Luke McGrath selected among the replacements.

Lock Tadhg Beirne is not included in the match-day 23 despite last week's two-try performance in Chicago on his full debut with Iain Henderson getting an opportunity to impress in the second row as Devin Toner is held in reserve once again.

"As much as anything it was because Iain wasn't involved last week," added Schmidt

"Dev's minutes are a lot higher so far this season than Iain's so we felt Iain really needs to put his hand up and probably play at least 50 or 60 minutes at a really good tempo and that's a real challenge for him because we know we can get that out of Dev and James Ryan has demonstrated that a number of times this season and earlier on in the year when he was working his way through the Six Nations." 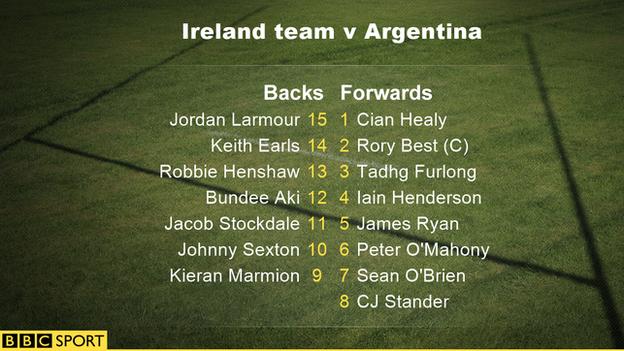 Argentina coach Mario Ledesma has selected a team of entirely home-based players with the bulk of the squad picked from the Super Rugby side the Jaguares.

In an attempt to disrupt the Ireland line-out, second row Guido Petti has been included in the Pumas back row while tight-head prop Santiago Medrano will make just his second Test start.

Scrum-half Tomas Cubelli is one of five players recalled to the starting team that started the last Rugby Championship match against Australia in October with winger Bautista Delguy also returning to the backline.

Ledesma has won two and lost four of his six matches as the Pumas head coach since he was appointed in August.

The team has four survivors from the 2015 World Cup quarter-final win over Ireland.

Matias Moroni, who scored Argentina's opening try in that Cardiff game, is named in the replacements while Julian Montoya, a replacement four years ago, is again on the bench.