England halted their losing run as they ground their way to victory over South Africa in the third and final Test.

South Africa went ahead via a converted Jesse Kriel try soon after the break.

But England turned the screw and four Farrell penalties and a Jonny May try sealed victory, although South Africa took the series 2-1.

After the snooker-table firmness and speed of the surface in the first two matches, the Newlands pitch was more akin to the sodden bogs found on the moors of northern England.

Combined with an extremely greasy ball it made for an entirely different kind of game to the pacy, cavalry charge rugby seen on the Highveld.

Instead we saw siege-gun rugby, with both scrum-halves repeatedly launching hanging box kicks from the base of the ruck as the two teams looked to edge into opposition territory.

Both sides made numerous errors as the ball squirmed from hand repeatedly.

But as the game wore on, the tourists - raised on the wet-weather rugby of an English winter - were increasingly dominant as they ended a five-Test losing run.

A tale of two fly-halves

All the headlines before the match, in England at least, had focused on the return of the prodigal son.

In the end the conditions dictated that Danny Cipriani - the reformed bad boy or misunderstood maverick of English rugby depending on your view - had a fairly quiet day on his first international start for a decade, until a superb late kick to set up May's try.

With scrum-half Ben Youngs kicking repeatedly from the base of the ruck and either Farrell or Elliot Daly taking the penalties, it was seven minutes and 50 seconds before the fly-half first handled.

He showed some typically nice touches with ball in hand, and put himself about in defence when South Africa attacked, quick to get back and have a second go if his first tackle did not succeed.

And with the final whistle imminent he finally produced the sort of visionary play his fans were waiting for, kicking through under extreme pressure for the flying May to win the race to touch down and put the game out of sight.

His opposite number Jantjies had a game to forget, spilling the ball several times, being charged down on others and failing to give the Boks any sort of control before being substituted after 58 minutes.

England's discipline had been extremely poor in the first two matches but they were much improved on Saturday.

Instead, it looked as though errors would be their undoing, as time and again in the first half they followed up good play with a bad mistake.

Two instances in particular stood out. First Joe Marler won a penalty at a breakdown in the England 22 to halt a threatening attack, only for Farrell to miss touch.

And, approaching the half-hour mark, Curry won a superb penalty at another ruck, but Daly promptly booted the ball dead rather than into touch.

The mistakes threatened to allow South Africa into the game, but the hosts were just as error-prone and the longer the match went on the more assured England looked, with the pressure they put the hosts under allowing Farrell's metronomic boot to keep building the score.

Up front the scrum was rock solid and England edged the battle of the breakdown, while Kyle Sinckler carried hard and often to give England momentum in a difficult first half.

In the back row Tom Curry confirmed he is growing into Test rugby on the open-side and the dogged Chris Robshaw relished the slow, wet conditions.

May confirmed he is a Test-class finisher on the wing and Farrell was assured at inside centre, but England were far from perfect.

The line-out struggled as Jamie George and co were put under extreme pressure, while head coach Eddie Jones will know it was a much-changed Bok side from the team that won the first two Tests.

But after their recent poor run all England will care about as they head for the beach is that an alarming run of defeats has finally been halted.

Man of the match - Tom Curry

The senior players were outstanding - the coach's view

Eddie Jones told BBC Sport: "We put ourselves in winning positions in the first and second Tests and just haven't handled big moments - today we got a couple of disappointments and we handled them much better. That's what's called experience.

"I thought the senior players today - Owen Farrell, Joe Marler, Chris Robshaw, Joe Launchbury, Mike Brown, Ben Youngs - were absolutely outstanding. They were some of our best players and in the previous games they've been at fault at times.

"Every Test is tough for England. It's a difficult environment coaching England, but I love it. This week I have enjoyed the challenge of getting a side back in a winning position. Today I am happy, tomorrow I won't be so happy."

Recalled fly-half Danny Cipriani told BBC Sport: "It's always great to start and represent your country. I felt very grateful to be out there, and to get the win was obviously the icing on the cake.

"It wasn't really a day for you to show your skill set, but I tried to stick to the team plan and structure and when I had a moment tried to do something that might benefit the team.

"Hopefully my performance showed how much it meant to me. There's a lot more hopefully that can come. I have loved every moment."

What did social media make of it?

Josh Verrills: Johnny May superb series. England's stand out player by some distance. Superb in all three tests against South Africa. Deserved all of his tries

Andrew: Danny Cipriani, a class act, has to keep the shirt for the start of the Autumn series

Rae: Where was this team for the last 2 weeks?? discipline and decision making was all they needed. Now can they create consistency? 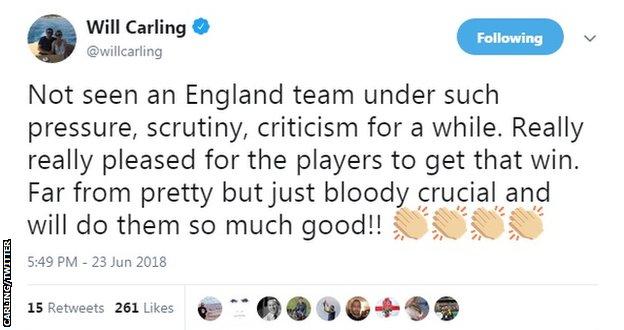 710 comments
Back to top
unknown