England players must be rested by their clubs as they "looked out on their feet" in the Six Nations, says World Cup-winning coach Sir Clive Woodward.

Eddie Jones' side lost their third game on Saturday as Ireland won the Grand Slam, and finished fifth overall.

"England's players need some spring back in their step," he told BBC 5 live.

"Their clubs need to give them a rest. Against France and Scotland the players looked tired. They looked fatigued."

As a coach I wasn't a fan of the Lions - Woodward 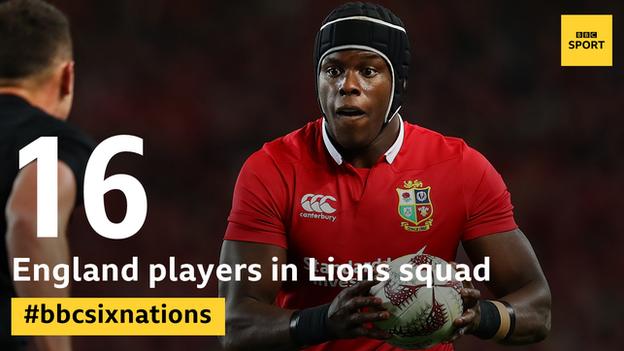 Woodward believes one of the primary reasons for England's fatigue was last summer's British and Irish Lions tour to New Zealand.

Of the 41-man initial squad, 16 of the players were English, 12 were Welsh, 11 Irish and just two were Scottish.

"Why has it happened? I wouldn't overstate what happened on the Lions tour," he said.

"As a fan I love the Lions, as a coach I didn't like it one bit. The way the Lions players are set up and play so many games with their clubs it's a bad year.

"Maro Itoje looked out on his feet and wasn't the same player we saw last summer against New Zealand. It's taken its toll on them."

Woodward coached England to the 2003 World Cup but quit his role a year later citing problems with access to England players.

And the 62-year-old believes it is a problem that is still hampering the national side.

"One of the reasons I fell out with Twickenham and left all those years ago and left the job because as head coach you need more control of your players," he said.

"We have the players and I'm a big fan of Eddie Jones, but they have just run out of steam. He needs to sort it out."

Following their Grand Slam triumph Ireland have replaced England as the number two side in the world.

"Joe [Schmidt] has done a very good job with them, he's a great coach, and the running of their game is good and strong," he told BBC 5 live.

"They've got central contracting which is allowing them to maybe have a little bit more control over playing time and player welfare, and you see the result of that."

Like in New Zealand, the Irish game is managed by the union, which provides the national coach with greater autonomy over his players compared to England and France.

It means some of Ireland's British and Irish Lions stars, who toured New Zealand last summer, have played fewer minutes domestically this season than their English counterparts.

As a result the Irish arrived at the Six Nations fit and fresh, according to Hansen.

"Even though the [Irish] guys have been on the Lions tour, the same tour the English boys have been on, they've had opportunities to rest up and be mentally, emotionally and physically able to go out and play good Test rugby," the former Wales head coach added.