Scotland scored three tries to earn a thrilling first victory over England since 2008 and open up the Six Nations title race at an exultant Murrayfield.

Centre Huw Jones scored two tries - Scotland's first against England at home in 14 years - and Sean Maitland grabbed another as the hosts led 22-6.

Owen Farrell landed two penalties, and his converted try on the resumption brought England to within nine points.

But Finn Russell's penalty after a Sam Underhill shoulder charge sealed it.

Underhill was yellow-carded for his no-arms challenge, giving Scotland a man advantage from the 66th to the 76th minute.

It was only a second defeat for England in 26 Tests under head coach Eddie Jones, and ended their hopes of a second Grand Slam in three years.

They remain in contention for a historic third successive Six Nations title, but now trail leaders Ireland - who they face in the final round - by five points.

After a break next weekend, England will face France in Paris on Saturday, 10 March, while Scotland - after a sixth successive home Six Nations win - will head to Dublin to tackle Ireland earlier the same day. 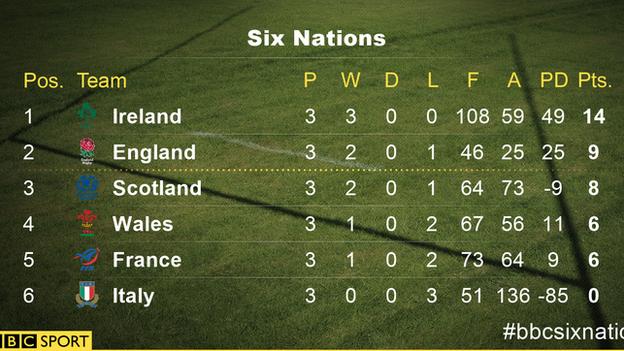 For so long we have waited for a Calcutta Cup to live up to the grand history of the fixture, to quicken the pulse the way it once did. This was not expected to be a classic, but it was. Scotland were not fancied anywhere outside of their own inner sanctum, but how good were they and how electrified was their citadel of Murrayfield?

In trying to plot the downfall of England's winning machine, Gregor Townsend had flimsy research material. Twenty five games under Eddie Jones and 24 victories. Their one loss was to Ireland last year, a win borne of Irish belligerence, particularly at the breakdown, where they resembled mad dogs in a meat house for 80 minutes-plus.

Scotland's work on the floor was astonishingly good all day. It was, in many ways, the key to everything. Their ferocity at the breakdown was fundamental to their day of days. Scotland came up with a magnificent amalgam of defensive brutality, creative brilliance and an unshakeable belief that towered as big and proud as the famous castle on the hill.

Their work at the breakdown brought them a penalty early on when Mako Vunipola was penalised and Greig Laidlaw popped it over. Even when Farrell levelled it, Scotland, hungry for work and playing with an accuracy and a tempo, kicked on.

Townsend demands organised chaos - and he got it when Scotland took a quick line-out 15 minutes in. A Scottish rumble shunted England backwards, a Scottish penalty gave them a free play. Russell, a maligned figure coming into this maelstrom, put a sweet grubber in behind and when the bounce was kind, Huw Jones gobbled it up and scored.

It was his third try against England in 95 minutes of rugby following his double last season as well as being his ninth in 14 Tests. Astonishing.

Laidlaw's conversion made it 10-3 and Farrell's second penalty made it 10-6. The pace, largely poured on by the Scots, was thunderous and it only cranked up. That Scottish breakdown came to the fore as the half wore on. With England threatening inside Scotland's 22, John Barclay, a colossus, turned over ball and away the hosts went.

A huge skip pass from the magnificent Russell, a huge break by the clever Jones and then Russell again at the end of the move, his delicate floated pass finding Maitland for the score.

Murrayfield was a place of utter delirium. And the decibels ratcheted higher and higher. Again England found their way back to Scotland's 22 and again Barclay came up with a huge play on the floor, winning the ball and denying England their momentum. That lifted the siege and sent the Scots on their way.

Enter Jones once more. He exploded on to the ball on the most gorgeous angle, sweeping past Nathan Hughes. With Mike Brown closing in on him on his right and Anthony Watson coming in from his left, Jones had a mountain of work to do to get to the promised land but he got there. Upper-body strength, leg drive, demonic intensity - and he was over.

Jones had now run for 118 metres - more than the entire England backline put together. Scotland had scored more tries against England at Murrayfield in 38 minutes than they had in the previous 18 years.

When Laidlaw put over the conversion, Scotland led 22-6. That is how the half ended. Scotland galloped up the tunnel, England got into a huddle before making their own exit. They retreated a stunned team. Never in the Jones era had they been so out-played and so lost.

Everybody knew that there was a reaction coming. There had to be - and there was. Farrell took advantage of a narrow Scotland defence and raced in to make it 22-13, with the conversion, four minutes after the restart. It was a score that made Murrayfield gulp hard. A nine-point game now.

Scotland butchered a try when Peter Horne delayed a pass with three men running free outside him. Farrell thought he had scored a second but play was called back for a knock-on from Courtney Lawes.

England could not find a rhythm. Scotland singularly refused to allow them to inflict their power game. Barclay was utterly immense, but his supporting cast was intense and focused and heroic.

Jones went to the bench. Underhill was not on long before he was off again, binned for a no-arms hit on Jamie Bhatti. To add to their pain, England watched Russell - taking over the kicking duties from Laidlaw - boom over the resulting penalty to make it 25-13. Murrayfield erupted anew.

England tried to rescue themselves, but they were denied at every turn. Barclay won yet another turnover, then the Scottish scrum won a relieving penalty, then Stuart McInally won another breakdown under his own posts after England went through multiple phases. As soon as England came up for air they looked a team riven with self-doubt. They knew it was done.

Scotland were positively walking on air. After a decade-long wait, their celebration was hard-earned and riotous. You sense that the blissful feeling that washed over Murrayfield in those moments will last for an awfully long time.