Stuart Hogg, a shining light in Glasgow's win over Exeter, believes Scotland can "do some damage" in the impending Six Nations Championship.

Hogg ended a two-month injury lay-off with a sparkling display at Scotstoun.

He now enters the Scotland camp, with the national team preparing for their tournament opener against Wales in Cardiff on 3 February.

"We had a good autumn and almost beat the All Blacks, but that's in the past," the full-back, 25, said.

"We can learn from that and look to improve, and get excited for the challenges coming our way. This tournament is huge, everybody watches it, and we feel we can do some damage. 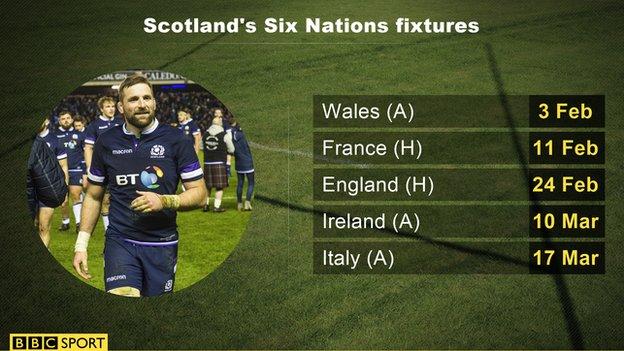 Hogg's last outing came in a Scotland jersey, the Hawick man producing a brilliant performance as Scotland fell just short of a first ever win over the All Blacks.

A hip problem suffered in the warm-up before the final autumn Test against Australia kept him out until Saturday, when Warriors earned their first Champions Cup win of the season against the English champions.

The full-back had been forced to withdraw from the British and Irish Lions' summer tour of New Zealand with a facial injury, then missed the early part of the season after undergoing shoulder surgery.

"I had some fun," Hogg said of his return. "It was good. We got ourselves into good positions at times.

"I just wanted to get out there. It's been a tough old season to stand back and watch and work hard in rehab. But it's good to be back, I wanted to have some fun with the boys, and what a cracking result that was for the team.

"I feel good. I managed to pull up alright after that game. It's all about recovery now and getting ready to fire into Scotland.

"It's always easier going into camp after a victory. Boys have got smiles on their faces and it's all about taking that from today into camp. It's exciting times. It's important now we recover and get ready to fire into the Six Nations."

Warriors were already well out of contention for a quarter-final place when the English champions arrived at Scotstoun in the final round of pool fixtures.

Hogg scored the first of Glasgow's four tries after just 71 seconds, and played a pivotal role in two of the others - both of which were mesmeric length-of-the-field efforts.

His interplay with fly-half Finn Russell and fit-again winger Tommy Seymour was particularly encouraging from a Scottish perspective.

"We chucked the ball about right from our own line, and there were a few swear-words towards Finn when he wanted to run from there, but thankfully it came off for us," Hogg said.

"We've got a game-plan in place we want to try and get victories from. We just backed our coaches' ability to learn there, and at times it came off for us.

"The main thing is we scored tries from the things we worked on during the week.

"In times gone by we've maybe not communicated accurately enough. It's something we've worked incredibly hard on, especially this week, because we feel we've been coming unstuck with that in times gone by.

"We all know how each other want to play; you've just got to demand the ball when you see space. It's all about resetting, picking our heads up and seeing what's in front of us, and trying to pick on the bigger boys. I think we did that incredibly well at times."