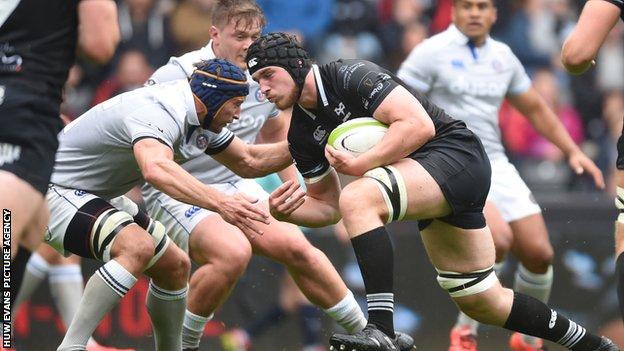 Scarlets had trailed 26-12 at half-time but summoned a batch of senior players from the bench and scored three tries through hooker Ryan Elias, wing Steff Evans and fly-half Patchell.

Prop Samson Lee also came on to prove his fitness after the knee injury that forced him to miss Wales' summer tour.

Over the weekend, former Llanelli RFC coach and chairman John MacLean died at the age of 86.

The wing scored twice in the first half, with Harri Millard and Kirby Myhill also crossing to help Blues take a 24-11 lead at the break.

Macauley Cook and Summerhill went over in the second period

Centre Jack Roberts, who signed from Leicester Tigers in the summer, and flanker Jim Botham, grandson of England cricket legend Sir Ian, both made their Blues debuts.

Despite two first-half tries from centre Adam Warren, Exeter led 21-14 at half-time and pulled away after the restart despite wing Adam Hughes adding a third try for the visitors.

Ospreys lost 14-28 to Bath at the Liberty Stadium on Sunday.

Centres Joe Thomas and Owen Watkin crossed for the home side in the second half, with James Hook converting both tries.

Welsh internationals Rhys Priestland and Luke Charteris started the match for the visitors, although former Ospreys flanker Sam Underhill missed the fixture for his new team through injury.