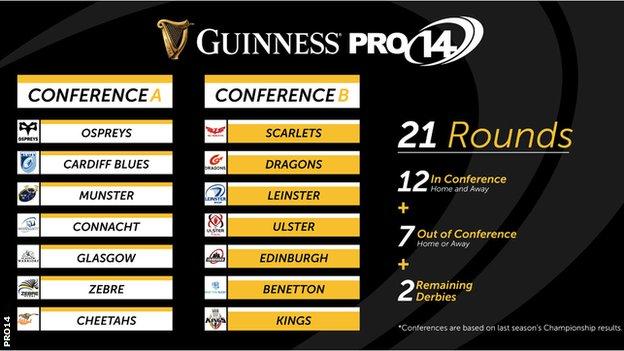 Champions Scarlets will begin their defence in the expanded Pro14 at home to new South African additions Southern Kings on the weekend of 1-2 September.

All four Welsh regions are at home in the opening round, with Ospreys taking on Zebre, Cardiff Blues hosting Edinburgh and Dragons against Leinster.

Ospreys will be the first Welsh team in South Africa, facing Cheetahs on 30 September.

"It will be great for the locals," said Scarlets coach Wayne Pivac.

"To have the Kings at home, there will be a lot of interest and I would be surprised if we didn't get a good crowd.

"It's a good kick-off time on a Saturday afternoon (17:30 BST) and let's hope the weather is good and we have some entertaining rugby."

Southern Kings are based in Port Elizabeth and play at the Nelson Mandela Bay Stadium, which was built for the 2010 World Cup.

Cheetahs are based at the Free State Stadium in Bloemfontein, which has a capacity of 48,000.

That should be the stadium where the Ospreys play the Cheetahs on 30 September at 14:00 but South Africa are hosting Australia in the Rugby Championship at the same venue in a match starting at 17:05 local time.

The Ospreys trip to the Cheetahs is currently officially in the schedule as starting at 14:00 on 30 September with a venue yet to be confirmed.

It might mean the Ospreys kicking off against the Cheetahs as a curtain raiser to the South Africa and Australia international or the game being switched to another venue.

Wales' showcase Judgement Day - which sees two derbies played back-to-back at Cardiff's Principality Stadium - is set to continue, as are the Welsh derbies around the Christmas and New Year period.

The Judgement Day date is being lined up for the final round of regular matches before the play-offs which will take place on the weekend of April 27/28/29 with the Dragons facing the Scarlets and Cardiff Blues playing the Ospreys.

That would mean not all of the final round of regular matches would kick off at the same time which has proved the tradition in the last few seasons.

The 14 sides are split into two seven-team conferences - two Irish, two Welsh and one each from Scotland, Italy and South Africa. The teams in each conference will play each other home and away.

Full fixtures can be found here: