After nights like this, when one team is flat on the canvas and the other is parading its smiles and clenched fists to all corners, cold logic makes a mess of hot-heads and dreamers alike.

Pre-match hype leads to hope, optimism gets a foothold over experience.

New Zealand's 30-15 win over the British and Irish Lions was the equivalent of the boxing world title fight where you fall in love with the idea of an underdog triumph and then watch the inevitable take over with familiar speed.

In the second minute at Eden Park, Elliot Daly came within a few inches of landing the opening blow for the Lions. With five minutes to go before half-time, Sean O'Brien's try brought them back to within five points with the conversion to come.

The scintillating move that led to it brought back memories of Jean-Luc Sadourny's famous score in 1994, the last time the All Blacks lost at this ground. At the start of the move, Liam Williams' side-steps had those who saw them recalling the dancing feet of Phil Bennett against the same nation in 1973. Yet there were also memories of Frank Bruno and Mike Tyson in 1989, and Harry Carpenter's reaction when the favourite was rocked by a surprise blow on that steamy Nevadan night.

It was a try from beyond the end of the world. O'Brien provided the Lions' own "Get in there, Frank" moment. Then the All Blacks supplied the knockout.

The Lions had five chances to score tries on Saturday and took two of them. New Zealand took three from three.

Each time, the opening came from the Lions momentarily dropping their guard: switching off having conceded a penalty five metres out, not reacting as Kieran Read and Aaron Smith seized on a penalty advantage from a dominant scrum, spilling the ball with Rieko Ioane lurking out wide once again.

You beat the three-time world champions only when you play to perfection and they drop off just a little. You must make your clean punches count and you must throw them off their own rhythm time and time again.

The Lions ran in patches. They cut the defensive line with sweet precision through Williams and Jonathan Davies and had Daly's speed and Ben Te'o's hands to work more. For 50 minutes, they were in the game. They were physical and were building confidence.

By the end they were on the ropes, no matter that Rhys Webb's late try made the final score painful rather than humiliating.

Their own big weapons - the driving maul, a strong scrum, a packed bench - made no impact. The only maul in memory led to a turnover; only Maro Itoje of the replacements represented an upgrade on the man who started. Their heaviest Test defeat in 12 years could have been worse.

If it was chastening, it was also straightforward to explain. Warren Gatland's men were limited to 38% possession and 37% territory. They conceded 11 penalties.

Up against them came a team who had won 46 straight at home and whose possible weaknesses turned out to be strengths too.

Read, making what some had thought a premature comeback after breaking his thumb six weeks ago, led with cussedness and inspiration. His one-handed flick off the ground in the build-up to the second try was a casual piece of brilliance fitting in with his side's instinctive ethos.

Dane Coles, the outstanding hooker in world rugby, a man who can pass like an inside centre, was supposed to be the key absentee.

Instead Codie Taylor, his unheralded and seldom-seen replacement, took a pass off his shoelaces while flat out down the right wing and dived over in the corner like a finisher from the sevens circuit.

Ioane, on his first Test start, was shown the outside by the spring-heeled Daly and produced a clean pair of his own in cutting response.

That was the seemingly flashy stuff. It was founded on a base of the ordinary done with excellence - Aaron Smith with his flat, fizzing passes and sweetly calibrated kicking from hand, Brodie Retallick making hard yards and winning quick ball at breakdown after breakdown.

When they purr, as they did on Saturday, the All Blacks appear about 10% faster in all they do than the opposition.

They seem to take double the number of risks in handling and drop the ball half as much. They wait with patience for an opening and then strike with the sort of dramatic acceleration that pulls defences apart. 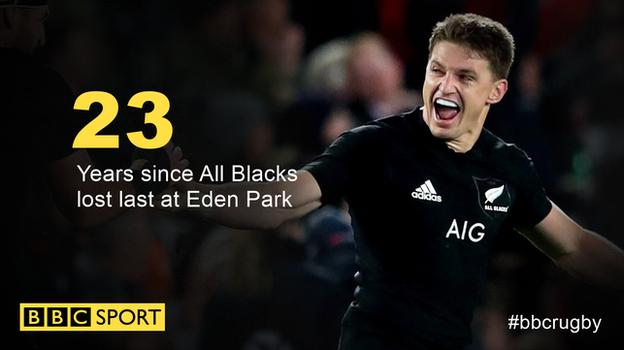 Gatland spoke afterwards about fixing the problems his side had encountered. You felt some sympathy for him, not only because opposition sides have been trying to fix those sorts of problems for years, but because the opportunity for significant improvement may be limited.

The Lions made plenty of errors, but they did so under intense pressure. Even those that looked unforced had their roots in the weight of the scoreboard and the failure of less risky options.

They could be more ruthless. But ruthlessness comes from time together and the sort of support and understanding that is mighty hard to pull off in seven short weeks.

Gatland could start Itoje instead of Alun Wyn Jones, and maybe bring in Courtney Lawes for George Kruis. Few other players outside the initial 15 or 23 have done enough yet to suggest they could make a bigger difference.

Only four times in 31 Lions tours have the team losing the first Test gone on to take the series. Only once in their history have the men from the British Isles won a series in New Zealand.

The Lions gave many of their supporters hope on Saturday. Against a team as accomplished as the All Blacks, that may be as good as it gets.