The British and Irish Lions team that starts the first Test against New Zealand will be the one that beat the Maori All Blacks 32-10 on Saturday.

The important aspect of the game in Rotorua was the victory. I genuinely believe the performance comes second.

The momentum required to bounce back was important after the midweek side lost to the Highlanders on Tuesday.

Generally if you win, it means the forwards have done their job - and that is what this team is looking like.

It's a side led by the forwards and half-backs, dominating in the areas those players are going to be involved in the most - decision-making and set-piece.

The line-out was good, the scrum was good and scrum-half Conor Murray was excellent in the execution of his box kicks, which is so important to the Lions getting out of their own half.

It's very much an Irish strategy that works well for the Lions, and that's one of the main reasons Murray is the number one scrum-half and definitely the starter next week.

He has the experience and he's beaten the All Blacks.

While it wasn't an edge-of-your-seat game, it was enthralling in another way in that the Lions pretty much shut the Maoris out.

Defensively it was tight and they showed good line speed to shut down someone like Damian McKenzie at 10.

Beauden Barrett will be a totally different proposition New Zealand fly-half on Saturday, but the Lions showed they can shut dangerous players down.

I don't think the Lions' tour captain Sam Warburton will start, he may be on the bench. That's because Sean O'Brien had such a big game and it would be a strange selection if he didn't continue at open-side flanker.

Blind-side flanker Peter O'Mahony, who captained the Lions on Saturday, is one of those guys who can inspire the team by doing the basics very well.

The French call it a 'spirit', the Kiwis and Maoris call it 'Mana'. It's a will, a mental capacity, to make his body do things that the normal person would struggle to do.

He is naturally brave and players like O'Mahony do a lot of work that isn't Hollywood.

As a former bricklayer, I would call it a DPC - damp-proof course. It's unseen, but it is the foundations of which wonderful buildings can be built.

Peter is one those foundations on which a team grows and develops. Without those players a team won't be successful.

George Kruis has been impressive since he has come back from injury for Saracens and this tour has been a continuation of that.

He's another one of those players like O'Mahony. His engine is perpetual, his thinking is clear with what he has to do and the line-out calls he makes.

All the players that get in this position have to have an X-factor and Kruis' is certainly his ability to play at an intensity for long periods of time, his clear thinking when it comes to calling the line-out and his decision-making.

He got caught a couple of times one-out stood still, which is a big error at this level. I hope that improves.

'Te'o can be more aggressive'

I thought Ben Te'o made some good breaks from inside centre, he looked hungry for the ball.

I think he can be more aggressive in the tackle. He can hurt people, legally - so he ought to.

For a man his size, he is not quite tackling his weight. I would have expected him to absolutely crumple someone by now - it would give the team such a lift.

His attacking play has been superb. He's got decent feet and good acceleration. He's a unit, and certainly grabs the attention of anyone's defence.

He went into contact well and there was only one time he looked like a rugby league guy, where he didn't know whether to challenge for the ball at the breakdown.

From that, the ball went away and the Maori All Blacks scored. Te'o could have gone in earlier and challenged it.

The Lions are creating opportunities but still not finishing them. For me, it's not so much not getting support to the line break, it's what happens at the next breakdown.

That's where you have disorganised the defence. Unfortunately, the reloading and realignment of that Lions attacking shape takes far too long. You don't see a lot of composure in that area.

Who should be Warren Gatland's first choice number 10?

It is a surprise, because you've either got Johnny Sexton, Owen Farrell or Dan Biggar at 10, who are used to commanding those positions.

There is no shape, no composure and that would be a concern - that's what I would work on this week.

You are looking at scoring a minimum of two tries against the All Blacks to give yourself a chance. You need 25 or more points and I don't see the Kiwis giving Leigh Halfpenny nine or 10 kickable penalties. 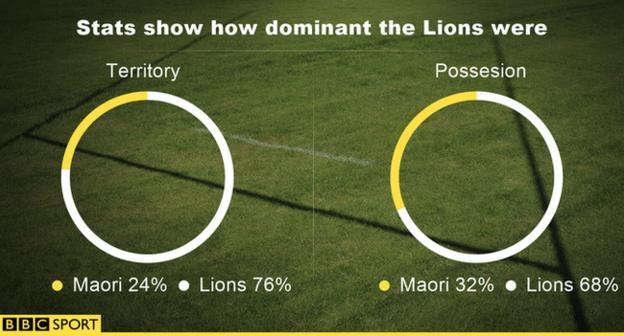 We saw a Lions side that dominated the pace of the game from the set-piece on Saturday, specifically from the line-out where they were able to catch and drive.

We've seen a similar game plan against the Crusaders and the Maori All Blacks.

Nothing will change for the Test match. What changes is intensity, accuracy and execution in getting support to the line-break and in reloading, realigning and getting your shape to enable you to score the try you should be scoring.

It's extremely important for the Lions to get that area sorted out and that shouldn't be too difficult to do.

All Blacks' tempo will cause problems

This All Blacks side, if they execute passes and up the tempo, can score four or five tries in a match whether it's blazing sunshine or hammering down with rain.

That first wave of the Lions' defence is very good. If New Zealand have a way of getting around that it will probably be inside and they will attack the edges of that Lions line speed.

It's unlikely they can get around it passing. They might try the cross-kick pass - which we've seen a lot in the Super 18 tournament - but you won't see the same mercy given by New Zealand.

They will finish off at least 50% of the opportunities they get. So that Lions defence needs to be imperious. If the All Blacks manage to get any tempo and speed into the game, I feel the Lions will struggle.

Kiwis are smart and technically gifted

The Lions see the scrum as a chance to win a penalty; the Kiwis see it as a way of starting their game.

I've not seen anyone tear apart the All Blacks on a regular basis. There might be one or two penalties that go against them, but they will rectify it.

They are too savvy and have too much nous to let that be the reason they lose a game.

They won't get hammered in the line-out for any length of time. The Kiwis are too clever, smart and technically gifted.

They have too large a skill-set to continually make errors that will lose them momentum and lose them games.

Of course, they are capable of having an off day - but the likelihood of it is very small.