The British and Irish Lions started their tour of New Zealand with a nervy victory over the Provincial Barbarians in Whangarei.

The first of the Lions' 10 fixtures was expected to be the most straightforward, against a side made up of fringe players from Super Rugby.

But the visitors were put to the test throughout and had to come from behind to secure the win after a scrappy performance.

A try from Sam Anderson-Heather, converted by Bryn Gatland - the son of Lions coach Warren - gave the Provincial Barbarians a 7-3 lead at the break.

Replacement Owen Farrell added the conversion but then missed a penalty, and the Lions survived a late surge from the hosts to hang on.

Warren Gatland's side face all five Super Rugby teams, the New Zealand Maori, and the All Blacks, during the five-week tour, with their next match against the Blues on Wednesday (08:35 BST).

A shaky start for the Lions

Gatland named 13 of the 14 players who attended the first training camp in his starting XV but the team, who landed in New Zealand three days ago, struggled to gel - especially in the first half.

Ireland's Sexton, picked ahead of Farrell and Dan Biggar in the number 10 shirt, missed a long-range penalty before getting the visitors off the mark from the tee on 17 minutes.

But the points failed to settle the Lions and moments later Wales number eight Taulupe Faletau was forced to make a try-saving tackle on Inga Finau, who was sent on his way after a quick break by Luteru Laulala.

Soon the Provincial Barbarians got the score they deserved when hooker and captain Anderson-Heather crashed over and fly-half Gatland added the extras against his father's team.

Captain Sam Warburton, Faletau and Jonathan Joseph went close to responding for the visitors before the break but they were continuously held up on the line by black shirts. 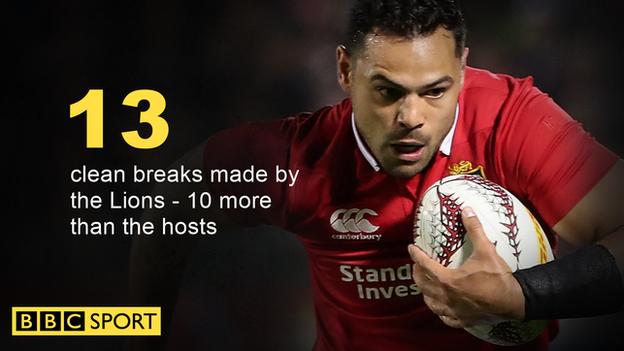 Replacements to the rescue

And the impact was instant. England and Bath wing Watson spun over in the corner, and Farrell added the conversion for a 13-7 lead.

The Provincial Barbarians did not give up hope of an upset and it fell to Vunipola to disrupt what was to be their final attack of the game, ripping the ball clear in a maul.

Gatland's side won the series 2-1 on their tour of Australia four years ago.

But the Lions have won only one series in New Zealand, back in 1971, and the All Blacks have not lost a Test on home soil to anyone since 2009.

Getting the first win on the board was always going to be Gatland's priority in this match, but now the backroom staff - as well as the players - have bigger tests ahead.

There are six more matches before their first meeting with the All Blacks on Saturday, 24 June and Gatland will need to decide which members of the 41-man squad are up to the challenge of facing the world champions.

Analysis - frustration for the Lions

A win is a win, so that is the number one objective completed, but there will be frustration amongst the squad and coaches as to why the Lions weren't more convincing against a scratch Barbarians team.

They have plenty of areas to work on, but we knew that would be the case.

And, rugby tactics aside, it will have been an unbelievable feeling for those lads who put on the red jersey for the first time. England and Harlequins prop Kyle Sinckler in particular was outstanding, showing his ball-handling skills, work rate and physicality are all of Test standard.

Enjoy a beer tonight, rest up and roll on Wednesday.

Were the Lions jetlagged?

Lions head coach Warren Gatland: "We would have preferred to have had a week in the UK with the full squad and a week in New Zealand before the first game.

"We arrived on Wednesday and we are still recovering from the travel and the guys haven't got into regular sleep patterns - perhaps the schedulers need to look at that for future tours.

"Some players are still seeing the doctor for sleeping pills to help them sleep."

What was the Kiwi view?

Gregor Paul in the New Zealand Herald:"The Lions got their heavily predicted opening-game victory but it was one that saw them reach unimaginable levels of mediocrity."

Phil Gifford for Rugby Heaven: "In blunt terms, the Lions looked incompetent. To be down 7-3 at half-time, and not take the lead until the 56th minute, was a disgrace to the jersey."

Mark Reason for Rugby Heaven:"The Lions bench may have finally got them over the line, but not a soul in the crowd was fooled."