Stuart Hogg and Tommy Seymour are the only Scots to make the British and Irish Lions squad for their tour of New Zealand.

It means Scotland again have a smaller representation than England, Ireland and Wales.

Former Scotland cap Andy Nicol said: "There are lots of big names missing out and they are not just Scottish."

Scotland this season finished fourth in the Six Nations, ahead of Wales, but Nicol believes that their 61-21 thrashing by England put paid to many of their Lions hopes.

"It has been a rollercoaster with the Lions throughout this calendar year," he said.

"When Glasgow went back-to-back with Racing 92 in the Champions Cup over Christmas and then demolished Leicester at Walford Road, then Scotland had that great start to the Six Nations against Ireland, I reckon we had about eight in the mix.

"But as the Six Nations went on, even though we beat Wales, Twickenham was the big problem.

"I was at a Lions event the week before Twickenham and Warren Gatland said to me he wanted to see how these Scotland players coped away from home at Twickenham and I don't think it could have gone any more wrong."

Sean Maitland's form for Saracens meant that the 28-year-old was being tipped as a contender, but Nicol was not surprised that fellow winger Seymour made it ahead of his Scotland colleague.

"He's a proven finisher, good under the high ball, he's in form," he said.

It is the first Lions squad since 1908 to not feature any Scottish forwards, and former Scotland captain Gordon Bulloch described the inclusion of only two compatriots in the squad as "disappointing".

He told BBC Radio Scotland: "Halfway through the Six Nations we were hoping for maybe five or six but the game against England really put paid to a lot of these guys' chances.

"It was a Welsh and English-based coaching squad, and that's likely to count for a lot.

"These guys are working with the players day in and day out. They know their strengths - and you also have to look back to the four or five-year histories of some of these players.

"They've been in big, clutch-type matches in Europe and the Six Nations. Whereas the Scottish players, apart from maybe Glasgow in the Pro 12 a couple of years ago in winning that, haven't really been in a situation where they had to dig deep and grind out a win.

"Glasgow had the chance against Saracens [in the Champions Cup] and didn't quite come up with the goods. The game is all about playing right throughout the season and winning things.

"Scotland are on the up but unfortunately haven't quite managed to put a lot of wins together [resulting in] silverware and that's probably held some of the guys back."

"The lack of a Scottish voice in the selection meetings can't have helped, and Gatland was known to be unhappy when his offers to bring Gregor Townsend and then Jason O'Halloran onto the Lions coaching team were rebuffed.

"Perhaps what will rankle most with Scotland fans is the huge contingent - 12 players - selected from Wales, a team who Scotland finished above in the Six Nations and defeated with a bit to spare at Murrayfield.

"You would imagine several Scots fall into the 'first reserve' category, and the brutal nature of a Lions tour means we could yet see more Scots called into the squad down the line as injury replacements.

"Two Scots in the initial squad, however, is a hugely disappointing return for all involved with Scottish rugby." 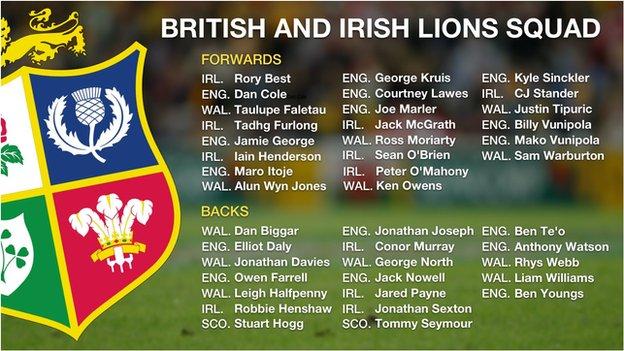