Rugby's concussion reviews are 'not fit for purpose' and the sport is becoming 'unplayable', according to a leading concussion expert.

In a wide-ranging interview with BBC Sport Scotland, Dr Stewart:

Back in January, in an attempt to lessen the incidence of concussion in their sport, World Rugby introduced heavier sanctions for high tackles. If the head area was hit, referees were mandated to dish out more penalties, more yellow cards and more red cards to the worst offenders.

"We're back to the Wild West"

For a few weeks after the new sanctions were introduced in January referees flashed cards of both colours, then the Six Nations arrived and everything went quiet. An international rugby coach, who does not wish to be named, has said that rugby's "Wild West" has returned. What he meant was that the zero tolerance approach has been watered-down and that high tackles are going unpunished, or not sufficiently punished, in the way that World Rugby's sanctions demand.

Dr Stewart is a consultant neuropathologist at Glasgow's Queen Elizabeth University hospital. He is also an associate professor at the University of Glasgow and the University of Pennsylvania and is a member of World Rugby's concussion advisory group. He is a former amateur rugby player and has been working in the field of brain injury for more than 15 years. 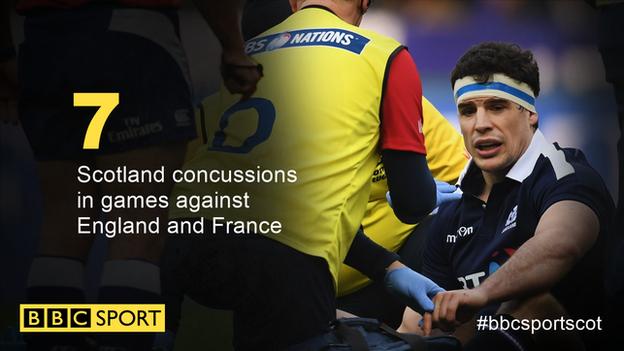 "For the first few weekends after the new sanctions came in the cards were out of the pockets," said Dr Stewart. "A point was being made and it looked like we were going to get somewhere. You could see the tackles going lower, but we seem to have drifted back. Cards were being dished out for high tackles, but where is that now? It doesn't exist. You can say that players have adapted. No, they haven't. Referees have adapted because they've stopped enforcing it with the same vigour.

"It's back to the Wild West, that's correct. My sense is that there was a brief flurry of activity to demonstrate that things were happening and then the foot was taken off the gas and we've gone back to where we were before. So, effectively, nothing has happened. There's been no meaningful change."

World Rugby disagree with Dr Stewart's view. "This opinion is not supported by the data, which confirms that the new tackle law application guideline is being consistently and accurately applied across elite competitions and this was also the opinion of international coaches and referees attending a recent World Rugby workshop.

In their games against France and England in this season's Six Nations, Scotland suffered seven separate concussions. "That's crazy," said Dr Stewart. "That's unacceptably high." Dan Biggar, announced in Warren Gatland's Lions squad on Wednesday, is the latest high-profile player to be involved in such an incident. 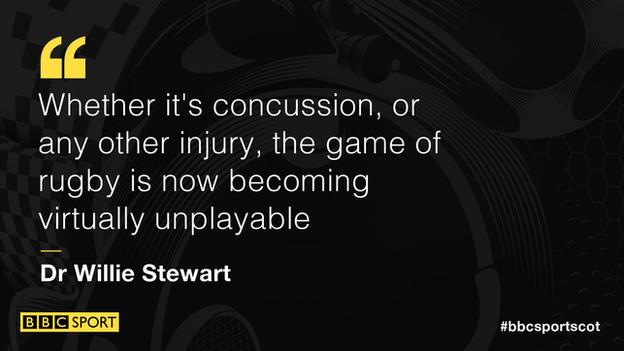 Earlier this month, while playing for the Ospreys against Leinster in the Pro 12, Biggar took a bang to the head, left the field for examination, passed his Head Injury Assessment (HIA) and returned to play. Just after the game finished he admitted that he "couldn't remember much of the last 10 minutes, to be honest. I was a little bit dazed." It raises the argument about how effective the HIA system truly is if players are passing the test while being unable to remember what they were doing on the field subsequently.

"Whether it's concussion, or any other injury, the game of rugby is now becoming virtually unplayable," said Dr Stewart. "When I was playing rugby people ran into each other and accidents happened, but what we now have is people setting out to collide with each other, people who go into a ruck with a shoulder to clear people out, people who go into a tackle forearm first or high - all that stuff is going on which could be taken care of.

"You can't go on playing a game where there is a reasonable expectation that a player who steps out that day is going to get a brain injury - and that is what they are."

It's not just what he sees as a relaxation of January's high-tackle sanctions that is concerning Dr Stewart, it's the situation surrounding reviews into three on-field incidents in December and January.

George North appeared to be knocked out when playing for Northampton against Leicester on December 3. After a HIA North was allowed to play on.

A week later, TJ Ioane was permitted to continue playing for Sale against Harlequins despite showing concussive symptoms. In the Untoward Incident Review (UIR) of the Ioane case, it emerged that two independent match-day doctors, suggesting that the player should be removed for concussion assessment, were over-ruled by the player's own team medic after administering the Maddocks questions (to determine if the player knew where he was and what time of day it was).

On January 14, in a Champions Cup game between Glasgow and Munster at Scotstoun, there was another incident, this time involving Munster's Conor Murray.

The incident happened just after the hour-mark. Murray was tackled by Tim Swinson and hit the ground like a falling plank. A Munster team-mate, Andrew Conway, rapidly indicated that something was wrong with Murray. Glasgow's Ali Price looked at the ref to take some action. Luke Pearce, the referee, blew his whistle seven times to illustrate that there was a potentially serious situation unfolding. He promptly waved the medics on to the field.

With the player still on the field, the Munster medics then went through the Maddocks questions with Murray and cleared him to play on. Straight away, Murray took another hit, this time from Josh Strauss. He was slow to get back up. It was only then that Munster removed him from the field. He passed his immediate HIA, then another and then another.

Untoward Incident Reviews were conducted by Premiership Rugby in the North and Ioane cases and by European Professional Club Rugby in Murray's case. No action was taken against any of the clubs and no changes were brought to the HIA protocol.

"The buck stops with World Rugby"

Dr Stewart claims these reports suggest the review system is not fit for purpose, with the Murray example a "miserable, shocker" of a report.

"Look at the detail," he said. "It doesn't bother to speak to anybody who might have witnessed the incident, it just takes a statement from the player's team.

"In the Murray report, the (Munster) evidence quite clearly states, after checking for a neck injury 'he was further assessed for any possible head injury. He answered all his Maddocks questions correctly,……and was cleared to return to play'.

"As soon as you ask those questions you are asking is the brain functioning and you are at least thinking there's been an injury that may have led to concussion. And if you are thinking that then in rugby it's an HIA and he has to be off the park while that assessment is taking place. World Rugby is very clear about this. That should have been a red line in the report that said, 'No, no , no'. Instead, the report agrees with the on-field management.

World Rugby said it would be "inappropriate to comment on specific cases" but confirmed that Maddocks questions should not be asked on the field of play.

"While World Rugby might argue these competitions and reviews are run by various other organisations," says Dr Stewart, "for the wider public World Rugby is "rugby". The buck stops with World Rugby when it comes to the HIA and its perceived success or failures."

The sport's governing body commented: "Prior to the HIA's implementation in 2012, 56% of players assessed and cleared to play on were later determined to have sustained a concussion. With its combination of symptom recognition, video review and off-field screening, the HIA process has driven a significant improvement in the identification and removal of players with possible and confirmed concussions.

The ultimate goal for Dr Stewart is simple - "to make sure that no concussed player stays on the field."

"Mistakes will happen, we all know that," he says. "There will be failings, but in each of these failings we must learn something - and I'm not sure I can see rugby learning the lessons."