Ireland wrecked England's Grand Slam dream and ended their world record run of victories with a dramatic win at a rejoicing Aviva Stadium.

The home side overwhelmed the Six Nations champions with their intensity and physicality, just as they had in Slam deciders here in 2011 and 2001.

In the process they also halted England's winning run at a record 18 Tests, leaving them level with New Zealand, who were also beaten by Ireland to bring to an end their record run back in November.

A first-half try from Iain Henderson and eight points from the boot of a battered Johnny Sexton established a lead that England never looked like closing, despite Owen Farrell's three penalties.

It was a horrible, chastening evening for Eddie Jones' men, the first defeat of his reign coming with arguably the worst performance of his 18 matches in charge, although they at least have the consolation of retaining their Six Nations title.

Ireland had come into the match having lost two of their four matches in the championship, but a green-shirted gale blew the men in white away, their much-vaunted finishers unable to get them out of jail one more time.

The victory ensured Ireland finished second in the table, ahead of France and Scotland on points difference.

Once again England will leave the Irish capital with their hopes of a Grand Slam in tatters, slow out of the blocks, sloppy with ball in hand and nowhere near their record-breaking best.

They were second best at the breakdown and unable to get a grip on a contest they had begun as clear favourites to win, Ireland with two-thirds of both territory and possession.

They appeared flustered from the opening moments and never found their precision.

In a city still celebrating St Patrick's Day it was another joyous piece of party-pooping, England's disappointment compounded by having to receive their Six Nations trophy when the players felt only defeat.

Having already lost first-choice scrum-half Conor Murray to injury, Ireland then had to reorganise minutes before kick-off when Jamie Heaslip hurt himself in the warm-up, CJ Stander moving to number eight and Peter O'Mahony coming into the starting line-up and producing an outstanding performance.

In an opening every bit as frenetic as expected, both sides had early chances, Farrell's pass hitting Mike Brown on the shoulder with Elliot Daly free outside him, Jared Payne delaying his own pass to Keith Earls down the other end.

After Sexton and Farrell exchanged penalties, Ireland then struck again, twice kicking penalties to the corner, Henderson reaching out after a driving maul to slam the ball over the try line.

A 10-3 lead reflected Ireland's grip on the match, with almost 75% territory and possession in the first quarter.

England were rattled, Courtney Lawes knocking on, Ford kicking out on the full from outside his 22, the men in white being forced to make three times as many tackles as their opponents.

The only silver lining for Jones was that the deficit was not greater, the bad news that England had never come from behind at half-time in Dublin to win a Six Nations match.

The English mistakes kept coming. Anthony Watson dropped a pass in space, a line-out that had been near-flawless through the first four rounds began to fail.

Then England made a mess of an Irish line-out on the 10-metre line, won the turnover and Farrell thumped over the long-range penalty to narrow the gap to four points.

It brought the contest to a fresh head, a battle of voices in the stands matched by a new intensity on the pitch.

Payne escaped through two tackles to thunder deep into England's 22 to halt their momentum, and after a late hit on Sexton the battered fly-half stepped up to drill over his second penalty for 13-6.

Jones had his finishers on, Jamie George for captain Dylan Hartley, Ben Te'o for Ford, Wood for Haskell, and a relentless driving maul brought a penalty that Farrell knocked over for 13-9 with 13 minutes left.

With rain hammering down from the evening sky, England began to make dents, only to lose a critical attacking line-out to O'Mahony when Farrell had opted to kick a long-range penalty to touch.

Never again would they get close to the Irish line, the capacity crowd celebrating wildly as Brown's final knock-on snuffed out England's final hopes.

Man of the match - Peter O'Mahony

What did the coaches make of it?

"We just wanted to make sure all the bits and pieces we needed to get right to get a skinny margin over a super team, we ticked those boxes.

"The bit of pride we can take is the three teams that sit above us in the world we have beaten in the last six months."

"Everything was wrong with the preparation because we played like that. I take full responsibility, I didn't prepare the team well and we will respond in the future.

"It was a tight old game. One or two things go your way and the game flips, they didn't go our way today, we didn't work hard enough to get those opportunities and that's what happens." 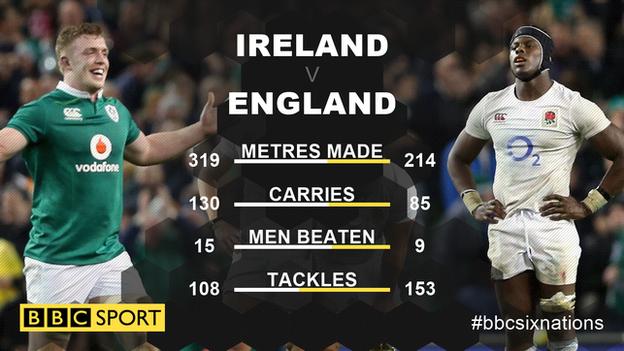 And what about the pundits?

"I'm applauding Ireland, that was one of the finest Ireland displays I've seen in a long time, the opposition are world class and Ireland have stepped up yet again, a fantastic display.

"I know how these England players feel, they will be low, dejected, but they should be extremely proud of how they have transformed English rugby."

"This will definitely rank as one of Ireland's greatest wins, going in truly against the odds against what is a tremendous England team."

How the internet reacted

880 comments
Back to top
unknown