A hat-trick of tries for Jonathan Joseph, and one apiece for replacements Anthony Watson and Billy Vunipola and two for Danny Care put the visitors to the sword at Twickenham as Owen Farrell kicked 26 points.

It was England's highest score in this oldest of international fixtures and equalled their biggest winning margin against Scotland as the Calcutta Cup was retained with style and swagger.

It means England face Ireland in Dublin next weekend with both consecutive Grand Slams and a world record of 19 Test wins in their sights.

It was a chastening afternoon for Scotland despite them scoring three converted tries, their hopes of a first Triple Crown since 1990 wrecked by a dismal first-half performance.

They lost both Stuart Hogg and his replacement Mark Bennett early and were forced to play the majority of the contest with scrum-half Ali Price on the wing, their winless run at Twickenham now stretching past 34 years. 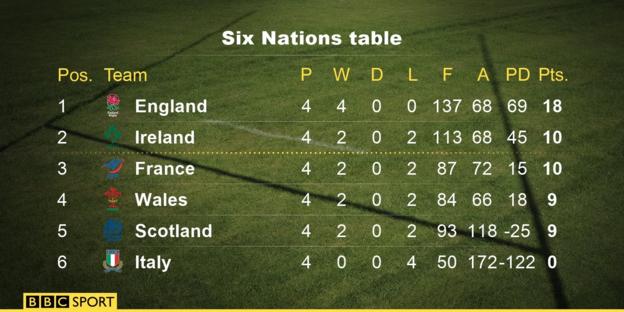 There has been much debate about England's form this Six Nations despite their long unbeaten run.

But in front of a celebrating capacity crowd they cut loose, running in three tries as they scored 30 points in a one-sided first half.

Four more tries and thirty-one more points followed in the second period as they established an unassailable lead atop the Six Nations table.

Never before have England scored more than 44 points against the Scots, and only once before won by the 40-point margin.

Two tries from Huw Jones were scant consolation for Scotland coach Vern Cotter, his team only offering any sort of threat when the match was gone.

After struggling to start well so often under Eddie Jones, England had come storming out of the blocks to bring Twickenham exploding to life.

With Fraser Brown in the sin-bin for lifting Elliot Daly above the horizontal in the tackle, England attacked at pace and with the Scottish defence stretched, Joseph ghosted between his opposite centres for the first try.

After 10 minutes England had 92% possession, Farrell landing two penalties to add to the conversion, and it only got worse for the visitors.

With star full-back Hogg off with a head injury, his replacement Bennett was carried off with a hamstring injury, forcing Price to switch to the wing.

And with Joseph dancing past four static defenders on 24 minutes from George Ford's lovely delayed pass, they were 20 points down with just 25 minutes gone.

Prop Gordon Reid burrowed over from close in after Scotland kicked a penalty to the corner, but another blistering England attack off quick line-out ball let Farrell free Joseph, Watson appearing on his outside shoulder to dash in unopposed.

Scotland strike back, but too little too late

Joseph ran on to Ben Youngs' short pass to complete his treble and make it 35-7 just after half-time, and while Huw Jones squeezed through Joseph and Jack Nowell for a second Scottish try, Eddie Jones then threw on his bench as England went hunting for more.

Vunipola, on as a replacement after returning from injury, battered over from a driving maul and the stage seemed set for white-shirted carnage.

But Scotland refused to roll over and as the game became increasingly unstructured, visiting centre Jones side-stepped his way into the left-hand corner.

However, replacement England scrum-half Care nipped over with nine minutes remaining, and relentless English pressure and possession with time up saw him cap the romp with a celebratory dive over the line.

Man of the match: Jonathan Joseph

Cyprus won 24 matches in a row between 2008 and 2014 but they are not a tier one nation (the premier sides in the game). England's best run before Eddie Jones took over was a streak of 14 consecutive wins between 2002 and 2003 - which ended just before their World Cup-winning campaign.

What is the players' view?

Scotland captain John Barclay: "We just didn't show up. We got off to a bad start and continued, our discipline was very poor and we gave away soft tries.

"You don't win however many games in a row without being a good side so good luck to England. We are trying to move away from the tag of plucky losers but that wasn't even that. We were useless."

"Coming back into the team, scoring a hat-trick and winning the Six Nations means it has been a great day.

"We focused on starting each session very well and you could see we did that today. The set piece was unbelievable and what we did on the back of that was very good."

What did the pundits make of it?

"Eddie Jones has created so much pressure on this side over the past few weeks and this has been their response, a 40-point whipping of Scotland."

"My goodness me, England were imperious. They will be very pleased with that, but it was an armchair ride they had for most of the afternoon.

"Scotland and their supporters will be bitterly disappointed, they just did not turn up. England were thoroughly deserving of the manner of their victory."