A spirited second-half performance at Murrayfield earned Scotland their first Six Nations win over Wales since 2007.

For all their superior physicality in the first half, Wales led by only 13-9 at the interval, Liam Williams rounding off a slick move for their sole try.

Scotland were dominant thereafter, with Tommy Seymour and Tim Visser crossing the line and stand-off Finn Russell earning 19 points with his kicking.

The result put Vern Cotter's team top of the championship table before Ireland's 19-9 win over France saw the Scots drop back to second. For Wales, though, it was a second loss in three matches in this year's campaign. 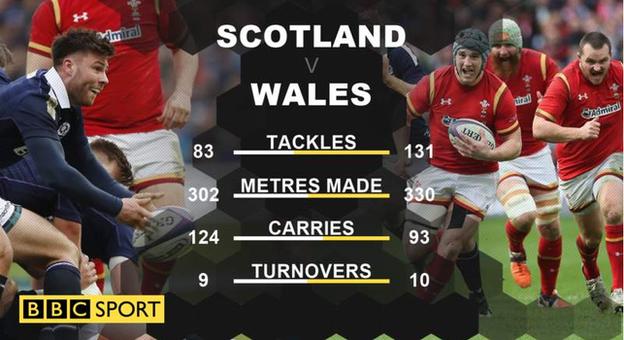 It was compelling from the first whistle, a fire-cracker of a Test match, ferocious, error-strewn at times, but utterly fascinating all the way through.

Russell and Halfpenny had traded penalties in the opening quarter before Wales made the first significant move.

A free-kick at a scrum was tapped by the wonderful Rhys Webb, a whirling dervish at nine for the visitors. Wales' eye for the chance was quick and their execution was a delight. They came screaming across the field, Halfpenny putting Williams over in the left corner. Halfpenny then converted to put Wales precisely where they wanted to be - in the lead on the front foot.

Scotland then suffered another blow a minute later when John Hardie went off injured. Another injured body piled on top of the other injured bodies - Alasdair Dickinson and WP Nel, Sean Maitland and Duncan Taylor, Greig Laidlaw, their captain, and Josh Strauss, their principal back-row ball-carrier.

Their resilience, though, is astonishing. On came Hamish Watson, who was terrific as Scotland set sail. Russell made it 10-6 with the boot, before Halfpenny re-established the seven-point lead. It was the last time Wales troubled the scoreboard.

Even before the break there were signs of the Scots stirring. Justin Tipuric had to pull off a fine tackle to keep Huw Jones out, but Russell at least gave them the consolation of three more points. A four-point game at the break. Scotland were a bit fortunate, but they kicked-on magnificently from there.

Seymour's try electrified Murrayfield, Hogg's sweet delayed pass-and-give to Visser drew Halfpenny and created space for the Glasgow Warriors wing to go over. There was concern about obstruction earlier in the move but the try stood and so did the conversion after Russell's effort slapped off the inside of the post and obligingly fell over on the right side of the crossbar.

Wales came again through Webb, but Ali Price, wonderful on his first start, pulled off a try-saving tackle. The visitors quickly became ragged. They ran into blue walls, each error, each big hit stripping them of their belief.

Russell eased Scotland further clear just short of the hour; 19-13. Wales responded and once again they were repelled. It was Webb again, darting in at the corner only to be put in touch, just, by Visser, arguably playing the game of his life for Scotland.

The Scots had more pressure to soak up, but soak it up they did. There was a desperate lack of invention in the Wales attacks, a predictability that Scotland absorbed before striking out themselves. And here, again, we saw the difference between the sides. Scotland had elan and skill and invention. Wales did not.

Visser's score was a glorious illustration of it. Patience in the forwards through the phases and the ruthlessness when the chance arrived. Hogg's hands in delivering the try-scoring pass to the winger brought Murrayfield to its feet. Russell converted, then added another penalty and Scotland were home.

Twenty unanswered points in the second half was a thunderous response from a Scottish team that can no longer be deemed improving or emerging. They've arrived. In the here and now, they are reborn.