Two Test matches of ferocious intensity and one well short of that.

After England and Wales served up a thriller that justified the build-up in Cardiff - capped off with a dramatic late match-winning score from the visitors' Elliot Daly - France out-muscled a spirited Scotland in Paris on Sunday.

Saturday's first fixture - Ireland's 63-10 steam-rollering of Italy - was the sort of confidence-booster that Joe Schmidt's side needed after an opening-weekend defeat by Scotland, but far sterner tests will follow.

With a fortnight's break before the next round, there is plenty to ponder. And it is still all up for grabs.

England are very powerful and confident

England's win over Wales was a very tight game of fine margins, and it was the visitors' perfect execution of the chance they were given to win the match that proved to be the difference.

When Jonathan Davies kicked into the backfield in the last four minutes at the Principality Stadium, England were able to impose themselves enough to create an opportunity and were then clear-headed enough to take it.

Individually Joe Launchbury and Courtney Lawes were mammoth in the second row, expending huge amounts of energy. Nathan Hughes racked up some huge numbers, with the most metres gained (75), carries (22) and defenders beaten (three) of any England player.

Elliot Daly showed himself to be a complete footballer. He showed the gas of a winger to round Alex Cuthbert for the crucial score, but he also has the vision of a very good full-back, the touch of a very good fly-half and added to which he can also kick penalties from his own half.

It is powerful thing to be part of a team that has got that winning habit. You are familiar with your team-mates, but training becomes very high level. There is no sympathy for mistakes that slow up the progress of the project and you go onto the field believing that you will find a way to win.

England are going to lose at some point and head coach Eddie Jones is right to say there are only so many times that they are going to come through these tight scrapes - but for the moment that confidence the players have is getting them over the line.

Jones may decide to use the Italy game to try some new starting combinations to see if the replacements can be as influential from the beginning of matches. Dylan Hartley was off the pace to my eye , but in modern rugby so much will depend on the condition of the players.

Compared with the game at Twickenham last year, where Wales made a host of errors and gave England a 16-point lead at half-time, this was a markedly better performance.

Wales could have easily won this year's match and when they play with that amount of energy they are a real threat to the top four in world rugby.

Some people questioned coach Rob Howley's decision to withdraw number eight Ross Moriarty after 52 minutes. The Gloucester man had had a blast up until then, a real physical presence with some immense hits in defence.

But it may have been that that impact was a result of him emptying the tanks in the time he was on the pitch, knowing he was going to be taken off soon after half-time. It is not a given that had he stayed on he would have been able to maintain that pace.

The balance of the Wales back row was good with Moriarty everywhere, blind-side flanker Sam Warburton doing the heavy-duty carrying and tackling and open-side Justin Tipuric fetching, disrupting and supporting in space.

They were more mobile than their England counterparts and were a big part of Wales securing seven turnovers to England's three.

There were a few mistakes and a few opportunities that went begging, but England's pressure and instinctive quality in those split-seconds perhaps forced that. The influence of an opposition as good as England cannot be discounted.

Scotland were not inventive enough

Considering they were outgunned in terms of bulk by an enormous France side, the challenge for Scotland was to manoeuvre their opponents around the pitch enough that they tired them out.

With eight pairs of fresh legs on the bench at French coach Guy Noves' disposal, that was always going to be difficult.

Scotland were capable of doing so, the problem was they could not muster the intensity for long enough periods.

It was not physical intensity they lacked. Instead, they had to be dynamic and inventive, and constantly remould their attacking shape to keep France guessing.

France knew that was going to be Vern Cotter's gameplan and the hosts were motivated enough to deny them space and momentum.

Stuart Hogg and Tim Swinson's tries were well worked, but there were not enough moments where they got around the outside or in behind France.

At times it seemed like Scotland had only 14 players on the field. Apart from their two tries, they rarely wobbled this French side.

France are brittle mentally in pressure situations, but Scotland did not cause them enough anxiety to see if they would crack again.

Scotland could have won the game - but they will not take much solace from that. That has been the story for too many seasons in recent times and they are supposed to have moved on from that.

The losing bonus point was something to take from a very tricky away trip though, especially considering how tight the standings are.

CJ Stander became the first Irishman to score a Six Nations hat-trick in 15 years, but the way he exploited the space and Italy's weak tackling did not reveal anything new.

We already knew from his performances in the autumn that he is a very impressive player who will batter his way through a brick wall with ball in hand.

For me, he is untouchable as the best number six in world rugby.

Ireland's intensity dropped for a 22-minute spell early in the second half between Stander scoring their fifth try and replacement Craig Gilroy crossing for their sixth, but Joe Schmidt's side kicked back with a strong finish.

You have to put this performance in perspective, though.

It was against a side who have spluttered badly over the past three halves of rugby that they have played.

Coach Conor O'Shea and his assistants Mike Catt and Brendan Venter - who were all together at London Irish in the mid 2000s - are trying to change Italy's culture alongside their style of play.

That is a major upheaval and, at the moment, they looked just off the pace.

This is my second-round selection of a Lions XV based on the form shown over the weekend. 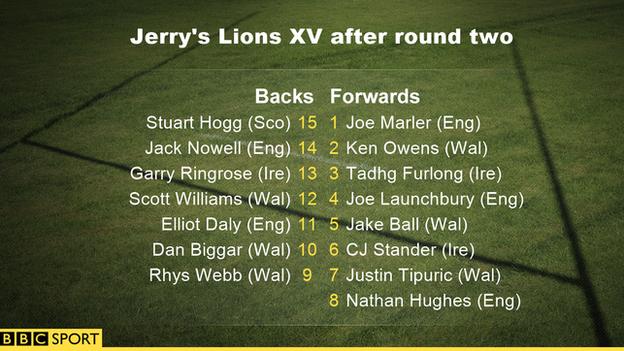