The Six Nations opening weekend has prompted as many questions as it has provided answers.

Is Scotland's win over Ireland the start of some sustained success?

Was England's scrappy, but nonetheless victorious, performance against France a sign of greatness or a symptom of something amiss?

And will Wales' failure to score a fourth try in beating Italy be the first significant part that bonus points have to play in Six Nations history?

Here is my attempt to pick through the intrigue of the first set of fixtures.

High on the Hogg

Before kick-off Stuart Hogg had been talked of as the probable Test full-back for the British and Irish Lions' tour of New Zealand in the summer.

On the basis of his two-try performance against Ireland, the Glasgow man is not just ahead of his rivals, he is clear of them by quite some distance.

There is nothing subtle about him.

For his second try against Ireland, he threw a hint of a dummy to throw full-back Rob Kearney off the scent, but it was not one of classical proportions where you are trying to sell the cameraman as well.

What he has most of all is just out-and-out pace. If he finds a yard of space either side of any player - it doesn't have to be a slow forward - they run the risk of being exposed.

Added to which he has got a huge boot, when he connects cleanly out of hand.

It is one of those old-fashioned spirals that just keeps on flying and flying.

He missed two out of his six tackles on Saturday, but that is more a result of the position he plays in rather than any defensive deficiency.

Full-backs are often exposed as the last line of defence in one-on-one situations where the odds favour the attacker far more than when the defence is less stretched.

As long as you are not a revolving door of a tackler, I think it is accepted that you are going to be a bit hit or miss.

As a whole, Scotland were efficient in attack as well as furious in defence.

And streetwise as well.

Alex Dunbar's try - where the centre popped up in a line-out to take a short ball and stroll over - was sensational in its conception and execution. It was really innovative, creative play.

Scotland travel to France next week, where one of their weaknesses could be exposed.

They do not have many heavy-duty ball carriers, apart from Josh Strauss in the back row. France however have a gargantuan pack.

Scotland struggled at times in the scrum against Ireland. Props Allan Dell and Zander Fagerson gave away three penalties under pressure.

Against France, they need a quick hook of the ball to get it out and away from there as soon as possible.

Ireland fail to live up to awesome autumn

Scotland's tenacity, urgency and relentless tackling did not give Ireland time to breathe, let alone pass the ball. It was just suffocating.

However, Ireland did not help themselves much either.

They took a lot of static ball with one-out forwards. When they did go wide, the passing was not as accurate as it could be.

We have seen a pretty flawless six months or so of rugby from them - beating New Zealand, Australia and South Africa - and I think they were victims of that in some ways.

As well as playing under that weight of expectation, Scotland raised their game in response.

Ireland can still win the title of course, but it will be that much harder now.

There were plus points, however.

Coach Joe Schmidt will be telling his men, quite truthfully, that they had enough chances to win the match.

Had they converted their early pressure and field position into points, they would not have been chasing the game and potentially not given away the penalties that Greig Laidlaw punished them from.

Injured fly-half Johnny Sexton's absence will doubtless be flagged by some.

Ireland missed his experience and leadership as any team would, but I don't think they missed him as a player.

Paddy Jackson had a good game at 10.

I expect England defence coach Paul Gustard to be flogging his players in training this week.

England's great performances under Eddie Jones have been born out of really aggressive defence that has battered, squeezed and suffocated the other team's playing style.

Against France they were too passive and inaccurate.

The line speed wasn't there and when they did arrive on the scene they missed 18% of their tackles. France, by contrast, missed only 12%.

The first half was made even harder by the yellow card for Jonny May and a succession of soft penalties that allowed Camille Lopez to keep the scoreboard ticking over.

This team does not easily fall away any more though.

That is because of their improved fitness, the play-making ability of Owen Farrell, their established habit of winning and, crucially, that they are a team of 23, not 15.

It was Te'o who went over for the decisive try and, from a selfish point of view, I would like to see him start against Wales next week.

He is more forceful and direct, but he also has subtlety with good offloading and passing. He is pretty much the full package.

You would lose that impact of bringing him off the bench fresh, but, if Owen Farrell switched to fly-half, you would have the playmaking skills of George Ford to call upon as a replacement.

Wales' win over Italy gave us a chance to assess their two fly-half options as Dan Biggar gave way to Sam Davies at 10 at half-time after suffering a rib injury.

In some ways it was not a fair test because Italy fell away markedly in the second half and were down to 14 men for 10 minutes after prop Andrea Lovotti's yellow card.

But, for me, Wales in the first half were a team set up for a more direct game trying to play a cleverer, more subtle style.

Biggar did try to play closer to the line during his time on the pitch but Davies has a better eye for the gap and more ability to deliver the decisive pass.

He will take more risk and we saw more than one pass intercepted that on another day could have cost Wales dear.

Scott Williams is getting a chance to establish himself as Jonathan Davies' midfield partner after spending so long behind Jamie Roberts in the pecking order.

Some of Williams' cameos during that time have been brilliant.

If it goes well against England next week, the reputation of the Scarlets duo as a combination will grow further and it will get harder for anyone to displace either one of them.

After each round of matches, I will be picking a Lions XV based on the form shown over the weekend.

This is my first-round selection. I'm sure it will provoke plenty of debate. 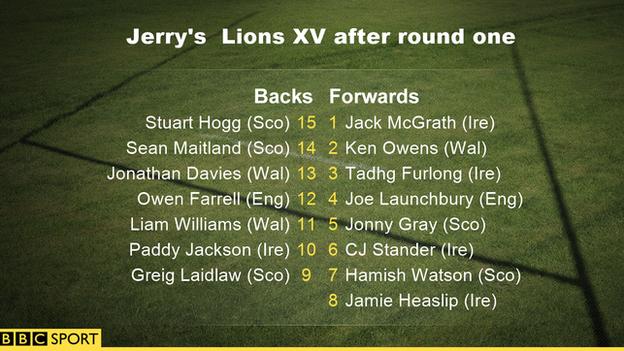