England stretched their winning run to 12 matches as they ran in nine tries against Fiji at Twickenham. 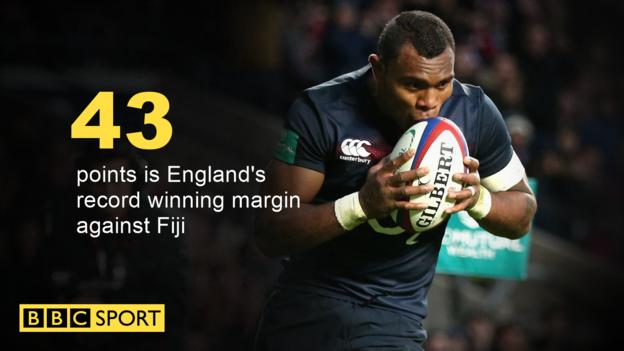 England head coach Eddie Jones had promised "fish and chip" rugby - namely that the hosts would produce a traditional, structured game to play to their strengths and not let things get loose, which would benefit Fiji.

But, although they duly used the power of their driving line-out to score three first-half tries, they also showed plenty of ambition, with the 10-12 axis of George Ford and Owen Farrell combining well to release the backs.

The skilful and explosive Fijians finally came to life near the break, scoring three quick tries as England slipped below the standards they had set initially.

But in the end the hosts - who made five changes to their starting XV and brought on several youngsters from the bench in the second half - equalled their highest ever total against the visitors.

"It was good fish and chips," Jones told BBC Sport. "It doesn't mean fish and chips is basic. I thought we played some sparkling rugby, really good stuff. The ball movement, crispness of passing was fantastic."

Recalled centre Joseph opened the scoring inside the first few minutes, skipping over from Owen Farrell's nicely delayed pass, and Daly was next to cross, latching on to to Ford's long pass and leaving the Fiji defenders tripping over each other as he cruised over.

Rokoduguni then scored his first Test try, against the land of his birth, and two tries from driven line-outs, for Harrison and Launchbury, meant England were still scoring at better than a point a minute at the half-hour mark.

"George [Ford] and Owen [Farrell] were clever, they read the game well, read their defence well, which created opportunities for the outside guys," added Jones.

"Rokoduguni has definitely got a smile on his face. I'm really pleased for him because he worked hard to get this chance. He got a lot of reward for the hard work he's done."

Fiji had yet to make it into England's 22, denying the world class Nadolo and sevens star Nakarawa the chance to show what they could do.

And, when they did finally get down the other end of the pitch, the pair featured prominently before the former crashed over in the corner for their first try.

On the stroke of half-time it was Nakarawa showing his power and skill to stretch over despite the attention of a pack of England defenders.

And early in the second half full-back Talebula beat three men on his way to their third score.

But Jones was not too disheartened by the Fijians' fight back.

"We are a young team, in terms of only being together 11 games. We are not going to get everything absolutely right," he said.

England had been knocked out of their stride but they managed to regroup and pull away convincingly.

And there was still time for Rokoduguni and Launchbury - the latter becoming only the second England second row to score two tries in a Test - to complete doubles of their own.

"Our control was pretty good, at certain times we wanted to join the party but our discipline was pretty good. We can't be too disappointed with that result," added Jones.

England welcome Argentina - who lost to a last-gasp Scotland penalty on Saturday - to Twickenham on 26 November.