England's 2014 Rugby World Cup victory has helped participation in the women's game in the country increase by more than 70%.

The figures formed part of the Rugby Football Union's announcement of a four-year plan for women's rugby.

This includes the England Women's team adopting the nickname the 'Red Roses'.

With 26,000 women and girls playing contact rugby, the RFU has surpassed its target of 25,000 one year ahead of schedule.

"We set ourselves an ambitious target when launching our strategy in 2014," RFU director of rugby development Steve Grainger said.

"We have created more playing opportunities in schools, clubs and universities, increased investment in facilities and strengthened our coaching base.

"We are also grateful to Sport England, whose financial support has contributed significantly to this growth."

He added there were more than 300 rugby clubs across the country with women's and girls teams, with opportunities to participate in sevens, the 15-player game and touch rugby.

"The England Women have also played a big role, driving interest in the game following their Rugby World Cup win in 2014 and exposing the sport to a wide audience through the sevens teams' participation in [the 2016 Olympics in] Rio and the strong performance of the 15s last season." 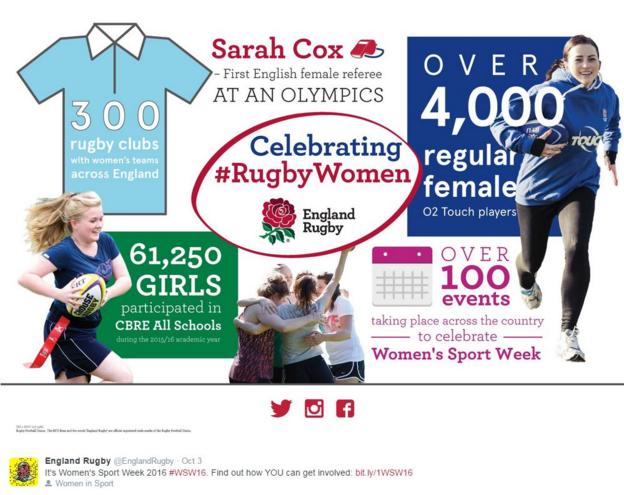 The national women's team will be adopting the 'Red Roses' nickname, although they will continue to be officially named and play as 'England Women'.

"The red rose encapsulates much of what it means to be an England player," RFU chief executive Ian Ritchie said.

"We wanted to create an identity for England Women that would inspire more people to get involved, whether playing or supporting the women's game.

"With more professional contracts, and ever-increasing investment in the women's game from grassroots to elite level, we feel this is a pivotal moment to shine a spotlight on the game in this country."

In a statement, the RFU said: "The rose, as the emblem of England Rugby, epitomises the unique qualities of England Women as strong, relentless and glorious."

'A more dominant identity on the world stage'

BBC Sport reporter Sara Orchard: "The New Zealand women have long been established as the Black Ferns and England's re-brand as the Red Roses will be part of establishing a more-dominant identity on the world stage.

"The RFU's commitment to women's rugby is streets ahead of the rest of the world when they became the first governing body to offer professional women's contracts in both XVs and sevens earlier this year.

"The only bone of contention will be that the England netball team is already known as the Roses, although it is likely both sports will be happy to bloom alongside one another."