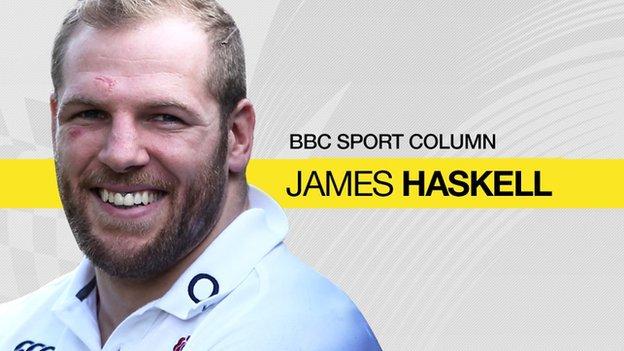 Rugby is, by its very nature, a physical, aggressive sport and most people appreciate the tough encounters. It's what attracts many people to play the game.

As a player you always accept a certain amount of physicality, and most players will do anything to get the upper hand on another.

That is what separates rugby from any other sport in the world - the ability to knock the stuffing out of each other, and then shake hands after the match and return to being best friends as you were before.

There is always a line with the rough and tumble, but in my opinion the unacceptable stuff is when you are in danger of doing serious damage to another player who is not in a position to defend themselves.

I think that players see a stand-up punch-up as what it is - it is the sly, cowardly and dangerous stuff that angers players. Or certainly angers me.

I have been eye-gouged a number of times and it's not fun, and very serious.

But I love any form of honest confrontation and if you come off second best, then that's the way it goes.

There's no point pretending skullduggery doesn't happen on the pitch. It does, but the dark arts are slowly disappearing, as there are more camera angles than at a Kim Kardashian photo shoot. And if players are caught then they should have the book thrown at them.

The kind of the thing I am talking about involves being cleared out of a ruck by your private parts, and as the assailant does so he makes it look like a perfectly legal clear-out.

The only person who knows what has actually happened is me, and it's funny how quickly you let go of the ball when you are compromised like that.

The sly thing of people treading on your hands can be pretty painful.

And sometimes, when players should be aiming to put their head underneath their opponent's head to clear them out, they instead aim for the head itself. I have received that a few times. Although mainly from my own team-mates.

Less bad perhaps is when you help yourself off the floor, but use an opponent to push yourself up - that's irritating rather than painful.

One of the worst things I've seen is a player try to land their knees into the kidneys of our scrum-half Joe Simpson, when Wasps were playing Stade Francais. That sort of thing is unacceptable.

There are people who talk when they are on the field and it is not always the people you would think.

Off the pitch you think they are lovely but as soon as they cross the white line they turn into complete lunatics.

There is one former England player who was the quietest guy off the field and then you could find yourself on the bottom of a ruck with him rubbing your face into the ground or clapping you when you gave away a penalty.

I would think 'what is this? You don't even speak off the field. Where has this come from?'

I'm not a big talker - I just get on around the field. Yes, I talk a lot off the field, but I don't really speak a lot on it.

Former Bath and England hooker Mark Regan used to famously talk a lot on the field and a lot of it was pretty much nonsense.

South Africa hooker John Smit famously said Regan had talked to him more in two matches than his wife had in 10 years.

Is sly, sneaky stuff ever OK?

I think back to the 2002 Heineken Cup final, when Leicester's Neil Back knocked the ball out of Munster scrum-half Peter Stringer's hands to win the scrum against the head and seal victory.

Let's be honest, that was a brilliant bit of cheating. You wouldn't get away with it now, but fair play he took his chance, rolled the dice and it came off.

Whose mentality do you admire on the pitch?

I really liked Joe Worsley's attitude. The former England and Wasps flanker was one of the most destructive tacklers in world rugby, but did not make a big song and dance about it.

Ma'a Nonu's attitude and professionalism are exceptional. Even when we were playing in Japan, which is probably a lower standard, the two-time World Cup winner maintained his standards and just really cared for the game. The former All Blacks centre has a passion for rugby and a constant intensity.

Another back with that is Jonny Wilkinson - the former England fly-half's intensity towards training was something to behold.

And then there's Richie McCaw. He had such an impact on the game as a leader, guiding the All Blacks to back-to-back World Cups. Richie is also a great guy off the field, but most of the time strictly business. I would always ask him advice about the breakdown, and any drills he liked. He would just pretend I never asked the question and move the conversation on. Either my chat was terrible or he just didn't want to give any trade secrets away.

I also admire Australia back rowers David Pocock and Michael Hooper. You would deal with them at one breakdown and then they would pop up on the other side of the field - they are relentless in their work ethic. And good guys off the field as well.

Alternatively I have met lots of players who I looked up to as a youngster and been bitterly, bitterly disappointed, when I have met them in person. I think, like everyone, you want them to be super inspiring. They say never meet your heroes.

Who has impressed you this season?

I'm really excited to see how the Bath renaissance goes under Todd Blackadder. They were top before losing to Leicester on Sunday, but slipped to third behind my club Wasps, and Saracens.

He is a coach I hugely admire from the southern hemisphere and I always wanted to play for his old New Zealand Super Rugby side, the Crusaders.

Of the players who have shone, back row Guy Thompson has made a lot of metres and performed very well for Wasps, and Jimmy Gopperth has been great for us at 12.

Saracens fly-half Alex Lozowski is a really good guy and it was sad to see him leave Wasps. He is very talented, he has started the season well, and I think that learning outside England's excellent Owen Farrell, he is only going to get better.

Semesa Rokoduguni has been devastating for Bath, making loads of clean breaks and beating defenders for fun.

I think he, along with Newcastle's Sinoti Sinoti, who has the naughtiest footwork in the Premiership, have both been eye-catching in their performances. I just don't know how you stop a person with feet like that.

In the southern hemisphere, New Zealand have just been incredible in the Rugby Championship, wrapping up the title with two games to spare.

Fly-half Beauden Barrett has shown what he can do - plenty - and for Dane Coles to have that sort of turn of pace as a hooker is just incredible, and his handling skills are pretty impressive as well.

It's going really well - I am out of the boot, off the crutches and into the trainer.

I am getting my body back into shape, getting my passing skills right and making sure that the toe is all rested up.

I have been counting my calories from the day after the operation, and have thrown myself into achieving the best possible shape I can.

Now I can train, I am doing three or four sessions a day and eating a lot of food.

I have 4,000 calories to hit a day, with a lot of protein and carbohydrate and only small amount of fat, and to hit the target takes real planning. However, if it were easy then we would all be Men's Health cover models.

Find out how to get into rugby union with our special guide.