Friday's Premiership meeting between Bristol and Exeter will be the first match between the two West Country teams for 2,313 days.

The last game six years ago was the second leg of the first-ever Championship play-off final - and a defining moment in the histories of both clubs.

Exeter came away with 38-16 aggregate win and with it a place in the Premiership for the first time.

Bristol were left to lick their wounds in the second tier, and needed six more attempts before securing a return to the top flight last season.

So, as they prepare to face each other for the first time ever in the Premiership, what impact did that 2010 game have on the two clubs?

'There's a lot of people in Bristol still hurting'

Gareth Steenson was Exeter's hero that night, kicking six penalties and two drop-goals, and six years on he is still a key cog in Exeter's attacking wheel, having been the Premiership's top points scorer last season. 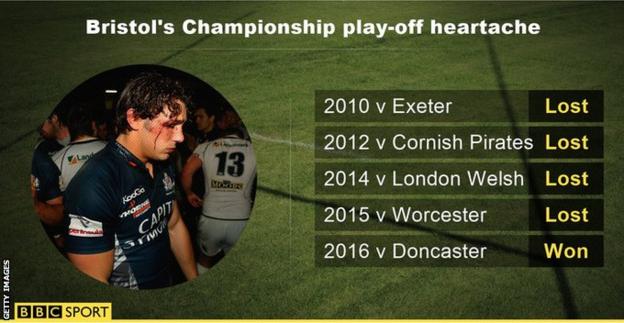 "It was a great experience for anybody involved with the club at that time," says Steenson.

"There's a lot of people in Bristol that are still hurting about that, but I think more so with the supporters.

"They've suffered a few hard losses since then, but for us it was obviously a great experience and one that we kicked on from, and we've had some great experiences since."

Time to 'do an Exeter'

Since the second tier became the Championship in that 2009-10 season, Exeter and London Welsh are the only teams to win promotion without having been relegated from the Premiership the previous season.

And while Welsh went straight back down on both occasions - in 2014-15 they lost every game they played - Exeter slowly built and became the force they are today.

Last season the Chiefs reached the play-offs before losing to Saracens - and also made it through to the Champions Cup quarter-finals, but then suffered a last-second loss at Wasps.

So, when Bristol finally returned to the top flight this summer, it was to Exeter that they looked.

"They initially struggled when they went into the Premiership, but they've managed to sustain themselves and they've just grown on that," Bristol's former Wales scrum-half Martin Roberts said.

"They've got a good culture and that's exactly what we're trying to build here."

Exeter's first season in the top flight saw them win their debut game at home to Gloucester, and earn five victories in their first 10 games on their way to finishing eighth.

Bristol, by contrast, have yet to win this season and were thrashed 70-22 at Wasps last Sunday.

"It's about overcoming the setbacks, learning from it and getting better," adds Roberts.

"We know we're not going to win every weekend, but it's about reducing our error count and putting our best foot forward."

Friday will be the first evening Premiership game at Bristol's new Ashton Gate home; they left the Memorial Ground in the summer of 2014 to move in with Bristol City, with both clubs owned by billionaire sporting philanthropist Steve Lansdown.

"The fans will be well up for it, it's going to be a feisty old evening and a very loud one as well, so we're going to have to be on our toes," says Exeter prop Ben Moon, one of a handful of survivors left in the Exeter squad from 2010.