England's whitewash of Australia is a massive result.

Northern hemisphere teams normally struggle to win one Test away from home, let alone two or three, so it is a huge achievement.

Each team wants to create its own history by winning Grand Slams, World Cups and the like, and this team has done that.

The series win ranks very highly in English rugby's achievements, although I wouldn't go comparing it to reaching a World Cup final, let along winning one.

England have traditionally been poor on their summer tours because they come at the end of exhausting seasons, but the enthusiasm and energy coach Eddie Jones has injected into the squad led to this superb 3-0 result.

His encyclopaedic knowledge of modern rugby has enabled him to get the best out of this England team.

He's pushed them psychologically and physically, asking good questions of them about what they want to achieve, and explaining clearly how they have to go about achieving it.

I love his comments to players, the media and the public and I think we're in for an entertaining time in the run-up to the 2019 World Cup.

To win the series 3-0 is also significant because Jones was saying "we're going to win 3-0" - like Sir Clive Woodward he put the pressure of expectation on his team.

Jones said England were going to attack Australia using 'Bodyline' tactics, challenging the Wallabies with their physicality, and they posed questions the hosts could not answer with conviction.

Which English players impressed you most?

Flanker James Haskell played the best rugby of his England career in the first two Tests and was arguably man of the tour.

He hit hard in defence, was a real menace at the breakdown - and who knew he had that pace?

At the age of 31 the likelihood is that he and back-row partner Chris Robshaw (30) will find their places under increasing pressure, but Haskell looks to have plenty of life in him yet.

Owen Farrell was huge, and the unrelenting way he accumulates points, landing 23 out of 26 shots at goal, is so important for England. Opponents know that if they concede penalties he will punish sides.

Farrell's defence is strong - he's not afraid to put his body on the line - and although he does nothing spectacular in attack, his partnership with fly-half George Ford is proving invaluable.

It may not be sensational but it is very efficient and you have to admire the way they work together.

Maro Itoje blows me away because of his age. He's still only 21 and it's always impressive to see a young player step up to the top level and not look out of place.

Jonny Wilkinson had it when he came in and Itoje is one of those wonderful players who is going to get better too with age.

Able to play both second row and blind-side flanker, he makes an impact in so much of what he does, and it is not just his physical abilities that impress - he reads the game so well too.

He carries aggressively with pace and can also bump people off, when he hits a breakdown it's like a bird of prey swooping down to make a kill with that huge wingspan of his, and when he tackles he wraps people up in a cloak of death.

But his brain is just as important. He reads the game so well he knows what is going to happen, which helps make him so effective at the breakdown for a tall man.

And he is starting to show rugby intelligence that reminds me of Martin Johnson, in that he knows when to try it on and break a law - he'll keep gaining that advantage until the referee catches on.

He has not lost any of the 26 matches he has started this season for Saracens and England but I don't see him getting carried away - he's a well-balanced young man and has the mindset to go right to the top of the game.

And what of the captain?

When Jones took over he said "let's get back to basics", and Dylan Hartley is part of that.

Hartley has led well and he is a very good scrummaging and throwing hooker - the solidity he brings there has been an important part of laying England's solid foundations.

However, I feel he has still got to work on his contribution away from set-pieces.

Jamie George has looked lively when he has come on and I expect him to keep pushing Hartley for the number two shirt.

Anyone who will be worried?

Jack Nowell had a difficult game in defence on Saturday but he is a very capable player and produced a great rip from the 6ft 5in Israel Folau from a high kick to prevent a try.

He needs to work on his defence but he's young enough to do that and he's got a good all-round game, including the ability to beat a man, being solid under the high ball and possessing a decent kicking game.

He will have to work harder, as will full-back Mike Brown.

He had an indifferent Six Nations and was not sensational on tour, but it's not like he's had a shocker either.

He's one of those experienced guys the team clearly needs and there's a spotlight on him purely because he only did well, while there were so many down under who did very well.

How about the tactics?

England are playing a pressure-based game that, at the moment, reminds me of Saracens about three seasons ago. They soak up pressure, hit their opponents hard and take their chances when they come.

Australia play a possession-based game and play more from their own half, which means there is more chance of getting knocked over.

England are putting immense pressure on the attacking side - they look to slow ball down and turn it over, then when they have the ball they aim to play for territory most of the time and squeeze sides from there.

It's a simple gameplan that when well executed causes big problems for the opposition.

Along with the likes of George Kruis, and his big brother Mako, Billy Vunipola is another player who has had a fine season.

The Saracens number eight is so big and powerful but what he needs to do now is learn to vary his game.

The opposition will know all about him and he knows he will have to start making dummy runs rather than just carrying the ball up all the time.

He needs to get a little bit fitter, use his footwork more and not be so one dimensional - big dimension though that is.

He is a very good player at the moment but as Jones has told him he can be one of the best, if not the best. In a way he represents this England team - very good, with wonderful foundations, but with the potential to be even better.

The 3-0 win over Australia is a magnificent achievement, but by playing smart rugby England can really go on to another level. Just like Billy, they have a very bright future. 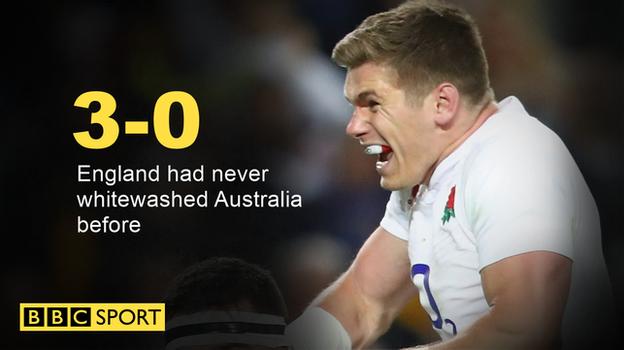