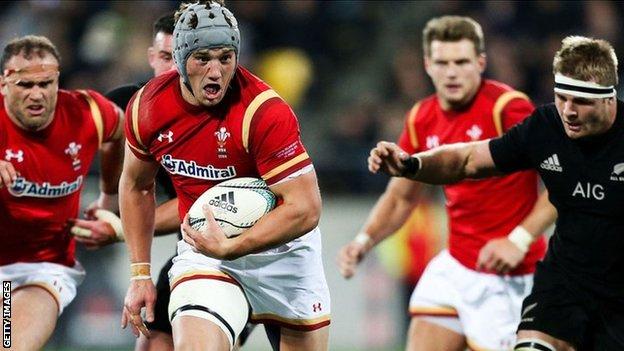 Coach Warren Gatland was "proud" of Wales' efforts in their 36-22 defeat by New Zealand, who took an unassailable 2-0 lead in the three-match series.

Gatland says Wales can build on a big finish in which they scored two tries.

"The courage to carry on playing and not to drop their heads and give up, that's a big tick in the box," he said.

"We had 58% territory and possession tonight and that's a massive number for us against the All Blacks, we've never done that before."

Wales had led the first Test after an hour seven days earlier only for the All Blacks to score 21 unanswered points.

In Wellington, the scores were tied at 10-10 at the break with the hosts crossing four times before late Wales tries by Liam Williams and Jonathan Davies.

"There were two or three key moments in the game and that's the difference.

"We're creating chances and the players are already aware of a couple of things that in the same situation next week they will do it a little bit different because they've learned from tonight and last week."

Gatland takes his side to Dunedin for the third Test next Saturday when Wales will be looking for a first win against the All Blacks after a 28-match losing streak stretching back to 1953.

New Zealander Gatland hopes his players can emulate the manner in which Steve Hansen's side secured their win.

"They are clinical and those are the small margins that we need to be better at," said Gatland.

"It's about freshening them up this week and having a real crack at the All Blacks in Dunedin."

After the first Test, Wales' midweek team lost 40-7 to the Chiefs in Gatland's home city of Hamilton.

"We've learned a lot about ourselves this week and some of the players," added Gatland.

"We'll be thinking that we can get better again for next week.

"The big thing for us is continuing to compete against the best team in the world.

"We'll learn a huge amount from this series."

The Wales coach was also pleased with how his side ended the game, having been blown away in the final quarter in Auckland.

"They tried to increase the tempo and what I was proud of was that we were the ones who stayed in the game towards the end," said Gatland.

"I was pleased with that last 20 and we can build on that for next week hopefully."

Gatland also praised full-back Rhys Patchell, who was winning his third cap after arriving down under as an injury replacement and playing against the Chiefs.

"I was pleased with the way he went. There were a couple of things defensively that he can work on. He showed some nice pace in that wide channel," said Gatland.