Newcastle Falcons can still expect a tough game at Bath on Friday even without the flare-ups of old, says director of rugby Dean Richards.

Both sides are looking to ease fears of being dragged into trouble at the wrong end of the Premiership.

London Irish are bottom on 13 points, while Falcons have 21 points and Bath are on 29 with six games to play.

"Years ago you'd go down there on a Friday night and it used to be a punch-up," Richards told BBC Newcastle.

"How rugby has changed. It's a lot more sanitised now but at the same time, it's still a tough place to go and the players know it'll be a difficult game.

"Our recent form has been pretty good. We put in a hell of a performance at Exeter.

"We're in a position where we're looking forward to it. We'll throw everything we can at it."

While Falcons might have hoped for a season pushing at the opposite end of the table, the past two seasons have been spent battling against the drop. 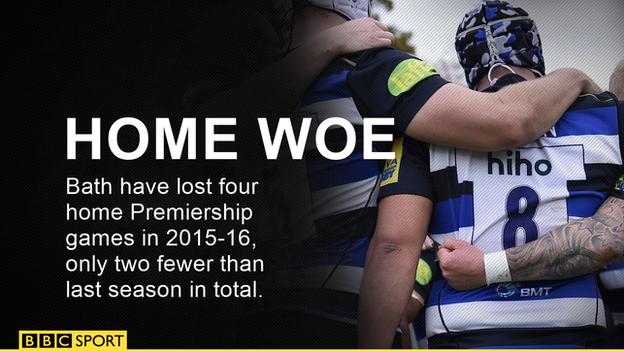 Bath, however, were runners-up last season and their slide down the table has come as a surprise.

"They, like us, have had a few injuries and a few people out throughout the year - and it goes to show it does impact," Richards added.

"They'll miss the guys who are out this weekend but we've got a lot of people injured, so the impact will be on both sides."

Despite their form, Richards is wary of the threat posed even in the absence of England players Anthony Watson, Jonathan Joseph and George Ford.

"They'll play from anywhere. They've got a great back three, while their centres Matt Banahan and Kyle Eastmond are their talismen," Richards added.

"From that side of things we know we have to be on it for the whole game, but their forwards lay the platform and we'll have to compete with them up front.

"We have to play in the right areas and make sure they don't get that chance."