England have their first Grand Slam in 13 years after holding out to secure a historic victory in Paris.

First-half tries from Danny Care and Dan Cole had given them a five-point half-time lead, only for the relentless penalty precision of Maxime Machenaud to keep France within touching distance.

But a third try in three matches from Anthony Watson calmed rising nerves before a brace of late penalties from Owen Farrell allowed the travelling support to sing their heroes home.

It marks a remarkable turnaround for new head coach Eddie Jones, coming just six months after the humiliation of a home World Cup exit at the group stages before he took control.

England had been confirmed as Six Nations champions last weekend, after beating Wales and France subsequently losing against Scotland, yet after a decade of near misses and disappointments this is a triumph that will be celebrated long into the night.

They were far from flawless, as in each of their five wins this winter, but Jones will know that this young side is capable of much more as they continue to develop.

"I'm very proud of the boys," Jones told BBC Sport afterwards. "It's a great achievement by the team. I always had confidence in them.

"Dylan Hartley has been fantastic and he has done a very good job. Billy Vunipola, Mike Brown and Owen Farrell have done very well assisting him along with James Haskell and Chris Robshaw. That nucleus has been very strong.

"The great thing is the best is ahead of us. We're looking forward to [the summer tour to] Australia and we're only going to get better."

Relive the drama as England won the Grand Slam

Machenaud and Farrell had exchanged early penalties as France attacked out wide with the flair of old, Scott Spedding and Virimi Vakatawa slicing and smashing into space down the left.

But it was England who struck decisively, recalled scrum-half Care picking the ball up from the base of an unattended ruck 30 metres out, handing off Jefferson Poirot and dashing away and under the posts.

Farrell converted before Machenaud's second penalty cut the lead to four, only for Eddie Jones's men to once again profit from lax defence.

This time it was Cole, taking the ball six metres out, spinning from the first tackle and powering through the second to roll over the line.

The French crowd whistled and jeered, convinced that Mako Vunipola had obstructed a defender, but referee Nigel Owens watched it back on the big screen just once before confirming the try.

Again Farrell converted, again Machenaud landed a penalty, and again France went left through the thundering Vakatawa, only for the big winger to be shoved into touch a few metres short.

England ceded a fine attacking opportunity of their own through a knock-on and, as half-time approached, Machenaud cut the lead to 17-12 with his fourth from four.

Jones, who replaced Stuart Lancaster in November, threw on Joe Marler for Mako Vunipola and Ben Youngs for Care, but it was Vakatawa who almost escaped as the second half began, scooping up a loose ball and crashing to within five metres before Jack Nowell's brilliant last-ditch tackle.

Machenaud and Farrell landed another matching pair of penalties and England began to stagger a little under the blue-shirted assaults.

Discipline had been an issue all night, as it had been throughout the championship, and when skipper Dylan Hartley was penalised Machenaud's precision made it a two-point game.

England were getting sloppy, the errors mounting up, and once again Billy Vunipola came to the rescue.

The big number eight powered away off a scrum, Youngs took the ball on and then, with the defence closing, sent a perfect grubber kick away for Watson to gather and score in the corner.

It did little to calm the nerves of the substantial travelling support. Farrell's conversion from the left touchline slid wide, England messed up the restart and Machenaud's right boot worked its magic again for 25-21. 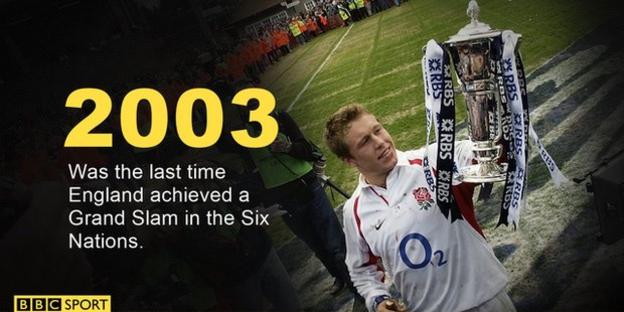 Still England led, the Grand Slam in their grasp with the minutes ticking away.

Then Hartley took a knee to the head making a tackle, appeared knocked cold and was stretchered off the field, and the inexperienced Luke Cowan-Dickie was rushed on to take his place.

Ten minutes to go, and with England's earlier threat with ball in hand appearing to have evaporated, Farrell landed a monster of a kick from halfway to push the lead out to seven.

At last France cracked. Xavier Chiocci was sent to the sin bin, Farrell stroked over the penalty to bring his own total to 21 and England could celebrate the end of a long and painful wait.