The best thing about this performance for Scotland was that it was an effort that can easily be repeated.

It wasn't a freak result like the Ireland match in 2013 where the game was won with only 30% of possession or a game levelled out as a contest by a miserable Scottish downpour. This was a patient, composed display and above all a real team performance.

The first five minutes of the game were concerning as Scotland attempted to soften up the French defence with some multi-phase attack that was fairly easily repelled. In contrast the French were looking dynamic, powerful and like they were enjoying their rugby. The build up to their try was vintage France; offloads, vision and pace to the fore.

Snuffing out the French threat

Whenever the French were on attack they looked dangerous, with scrum-half Maxime Machenaud setting the tempo, but as the game wore on it seemed that they were as likely to break the line with a majestic offload as they were to spill the ball in possession. The defence came up with big sets at crucial times, players mirroring each other's decisions on whether to step in and cut the space down or hold off and allow support to arrive. 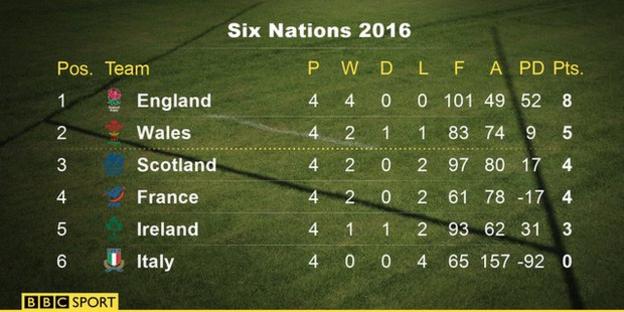 A key defensive play was Greig Laidlaw's charge-down of Francois Trihn-Ducs cross kick in the second-half - Wesley Fofana was walking in had the kick been completed. A crucial play that required nothing but effort and a desperation to win.

In attack, I think the softening up process at the start of the game was very important as it gave Scotland the confidence that they could hold onto the ball whilst fatiguing the defence. A noticeable part of the game plan was the decision to kick to apply pressure if the attack was going no where. Three or four neutral phases around the half way line signalled the use of the grubber kick into the corner or the high kick and chase.

This tactic can be used to either create counter attack ball or pressurise a teams exit strategies. However, it also conserves some energy as often after a few phases of going nowhere with slow ball it becomes like running into a brick wall and defences get on top, often producing penalties.

The attack was very composed and varied. Peter Horne, who did a magnificent job stepping in at fly-half, played with width but also took the ball to the line effectively and had a significant input in the Stuart Hogg try. His incision and offload was the one that gave the forward momentum for the try.

In the tighter exchanges it is great to see the forwards so comfortable putting the extra pass in to manipulate the defence. I think this can be taken a step forward by the outside player really timing his run and hitting the ball at pace as there were often times when the ball was taken in a slightly static position, making the breakdown harder to win.

A step in the right direction

Something that I mentioned in my column after the Italy game was the ambition shown in the lead up to the Tommy Seymour try as a result of a penalty advantage being called. This happened again with the speculative Laidlaw pass and the magical parry from Hogg into Tim Visser's hands to score. I hope that Scotland have the confidence in their ability to realise that even without the penalty advantage they can move the ball and challenge defences in the wider channels in the opposition 22m.

Another satisfying team performance and another step in the right direction. You saw on the players faces the joy and relief that this win brought them and it should not be underestimated. You definitely get the feeling that they want more from this campaign and an away fixture against Ireland after a six-day turnaround will be another great test.