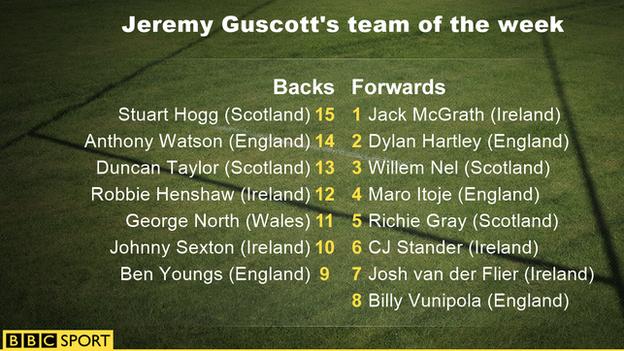 England - much improvement, but room for more

Some have suggested that England's 25-21 win over Wales ranks up there with the sensational 38-21 dismantling of world champions New Zealand in December 2012.

That would be going too far. The All Blacks were a better team beaten by a larger margin in a more consistently excellent performance that day.

But this performance is close to the best we have seen from this generation of England players.

The exciting thing that Eddie Jones has brought since he arrived as coach in November is tempo.

It is clear in the faster pace with which players are coming on to the ball, the swift recycling and the speed of thought out wide.

The forwards are running hard at arms and winning the contact before the brains trust of Owen Farrell and George Ford work out where the space is and how to release the pace and guile of Anthony Watson, Jack Nowell and Mike Brown to exploit it.

It is easy to describe, but hard to stop.

The performance of Maro Itoje - who won the man of the match award in only his third international - grabbed a lot of attention.

I was in the England side when a 22-year-old Martin Johnson made his Test debut against France in January 1993.

Johnson had been due to play for the England A side against France, but was called up as an 11th-hour replacement for the injured Wade Dooley by coach Geoff Cooke.

Dooley was an enforcer in the second row. He was a totem we looked up to and the other team had to make a plan for. They were big shoes to fill, but Martin fitted in seamlessly, coming out on top against Abdelatif Benazzi and Olivier Roumat as we won 16-15.

Maro has thrived similarly on the international stage. That is the sign of a very good player. He shows great intellect with the way he plays and is very articulate and grounded when interviewed.

We have to avoid putting pressure on him to be the next Johnson, Paul O'Connell or Brodie Retallick. Let's allow him to develop and show us what the Maro Itoje way is.

The big weak point of England's Six Nations campaign so far has been their indiscipline.

Maybe it is partly a product of the more confrontational mindset that Eddie Jones has brought in. But maybe that harder edge is also why this time England held off a resurgent Wales, when in the World Cup they folded.

Wales caught in a perfect storm

It started going wrong right from the start for Wales.

Itoje stole the ball in the first line-out. Then there was a mix-up between Scott Baldwin and Jamie Roberts in attack, and George North ran straight into George Ford out wide.

It was a perfect storm.

Wales were sloppy, imprecise and kicked poorly at the same time that England were executing with total accuracy. That is where that early one-sidedness comes from and it lost Wales the game.

Wales seemed to fire a lot better when Rhys Priestland came on to replace Biggar at 10, coinciding with their late rally.

Priestland takes the ball flat and at pace and draws players on to him whereas Biggar stands deeper, comes at less pace and gives himself more breathing space.

Maybe it was that more aggressive attacking stand that got Wales moving late on.

Certainly as a centre I would prefer to play outside Priestland, and it will be interesting to see whether coach Warren Gatland gives Biggar a break for what is a dead rubber against Italy next weekend.

Full-back Stuart Hogg was the ringleader in an entertaining Scotland win over France with his blind flicked fingertip pass to put Tim Visser in at the corner the most dazzling of his party pieces.

When he is in that mood, he is scintillating to watch - someone who makes things happen and sends a frisson of excitement around the ground every time he gets hold of the ball.

In the past he has started fighting his own personal battles and getting frustrated, taking away from his own game. But during this Championship he has kept that in check. Maybe that is part of him maturing - he is still only 23 years old.

It is too early to say whether this Scotland side as a whole have turned the corner after racking up two successive Six Nations wins for the first time since 2013.

But there were plenty of things for coach Vern Cotter to be pleased about in their win over France.

Their scrum and set-piece was effective, they showed a cutting edge and ruthlessness out wide, had the mental strength to withstand the pressure when France came at them hard in the second half and won with room to spare in the end.

Finding an alternative to Finn Russell at fly-half was a plus point that they could not have predicted. Peter Horne did exceptionally well when summoned from the bench after Russell's head injury, getting up to speed in a position that is not his specialty.

They could still do with a few more hardened ball-carriers to make the hard yards and soften up opposition defences, but it was a performance to build on.

Schmidt's sides throw off the shackles

When Joe Schmidt first arrived as Ireland coach three years ago, his playbook planning was very detailed and clever, and developed his team into two-time Six Nations champions.

Injuries to the likes of Tommy Bowe, Iain Henderson, Luke Fitzgerald, Peter O'Mahony, Sean O'Brien and Cian Healey have hit Ireland's campaign this year, but I think rugby has changed as well.

The World Cup showed the need for teams to be expressive and spontaneous within their skill sets.

You cannot be so prescriptive. You cannot play rugby by numbers.

Back in Ireland, some of the media have called on Schmidt's side to show more ambition and spontaneity, and their superb sixth try, dotted down by Jamie Heaslip as his side went the length of the field, showed that.

Doing it against a poor Italy side is one thing, however. Having the skills and nerve to repeat that sort of score against the very best is quite another.