The northern hemisphere teams were unable to live with their fleet-footed rivals from the south. To some critics, the 2016 Six Nations has only served to further underline the size of that schism.

Boring, stale, conservative and stifling - they are just some of the accusations levelled at a tournament obsessed by the need to win.

Having won the World Cup with New Zealand in 2011 but also played in Europe with Nottingham and Toulon, former All Black Ali Williams offers a unique insight into the strengths and weaknesses of the Six Nations.

The Six Nations is not a flawed product, it is a fantastic tournament.

It is the product on the field that people are criticising - not the competition, not the crowd, not the commercial side.

I think the Six Nations is methodical rather than intuitive.

The thing I have got out of it living over here and being here for the Six Nations and experiencing the culture, is that the here and now is what people look at.

It is not the skill factor - that is all there, it's the mindset that is the pure difference between the two sides of the world.

If you are too nervous or too scared and fear doing something wrong then you are never going to push yourself.

You are never going to challenge yourself to get better or enhance a skill that doesn't come naturally.

That's what I feel here in the Six Nations. There is a restraint on trying new things. It is a matter of instilling confidence in players to play what you see rather than play how you are coached or play how you think you should play.

I am probably a prime example. I put on an All Black jersey and thought I could do anything because they instilled that confidence in me.

I was doing cross-field kicks from quick taps. I am a second rower. That is not what you should be doing in the manual of rugby but that is now what we do with the All Blacks.

The fitness debate between the two hemispheres is about match fitness.

The guys I have watched in the Six Nations are fit, don't ever doubt that.

What England coach Eddie Jones is trying to say about fitness is that in the northern hemisphere your game fitness is different because you are playing longer, more physical, slower, mental games rather than your Super Rugby-type of run, run, run, run and the opportunities will open up.

Eddie is saying is why can't we challenge these guys to be fit enough to play a more open expansive game?

Unfortunately you don't get that unless you are doing it that way every week.

France captain Guilhem Guirado played 60 minutes for his club five days before a Test match against Wales. That just wouldn't happen with the All Blacks. 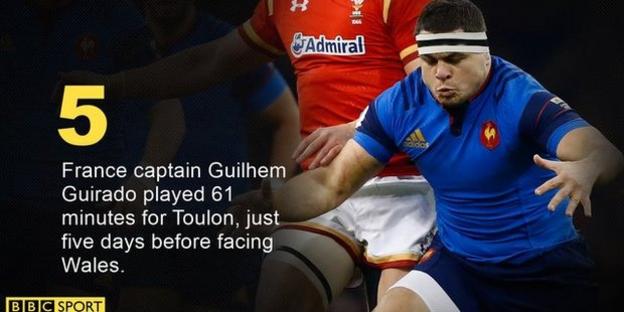 You are not going to have collective success if you have both got different angles and motivations.

By that I mean club v country. Until they find neutral ground and disagree on some things but yet commit on others, you are always going to have these obstacles.

Are players going to change it? They're not. They can't.

This is a commercial model that needs to look at itself and where they sacrifice some commercial upside but also get better longevity in players and a better product on the field and protect the international game.

Warren Gatland is right when he says that as soon as there is a mistake then there is an advantage that could lead to a try.

It doesn't just have to generate off that however. Yes, that is one of the prime opportunities to score tries but the drive should also be when you have got the ball to not fear a mistake and get a try conceded against you, you should try and want to score.

France on Friday night were an example of that and an example of not having a collective understanding of how they want to play together.

For me that's the frustrating part. If you are saying you are only going to score off mistakes, what are they teaching them in the week?

What does Wales stand for? What is their mindset? Once you have established that, then you play like your mindset.

That is where I think France are potentially going wrong. What does France stand for?

In their mind and their culture, what are they? They know that they have just got to show it on a rugby field. They can do it, we all know it and we all still talk about French flair.

They have got it, they are just going through a stage where they are not showing it to people.