Wales cut loose in the final 20 minutes to register a ninth consecutive win over Scotland.

But Warren Gatland's team had an uncomfortable hour before tries from Jamie Roberts and George North lifted the siege.

Duncan Taylor's late try was little more than a consolation for the Scots, who have not won in Cardiff since 2002.

After the stolid fare on offer in Paris where France beat Ireland, this game served up an antidote with Scotland asking tough questions of the home team.

But for all their endeavour, Scotland were unable to make their territory and dominance pay and once Tom James' 80-yard break broke the shackles, Wales killed the game off in a clinical seven-minute spell.

Wales started furiously and were ahead in the seventh minute when Biggar's chip was knocked back by Roberts, and Davies snapped up the bouncing ball to sprint in for his sixth try in 11 Tests.

Replays suggested the scrum-half might have been offside, but far from being overwhelmed the Scots hit back in style.

Their number nine Laidlaw sniped and Finn Russell's chip was allowed to bounce before Seymour pounced to score.

The Glasgow wing was also a key figure as the Scots won the aerial battle in the face of Wales' muscle.

And their half-time lead could have been greater if John Barclay, breaking from deep in his own half, had spotted the supporting Stuart Hogg on his inside instead of kicking ahead and into touch.

Biggar and Laidlaw exchanged penalties after the break, before an 80-yard James break eased the pressure, and could have brought more had it not been for Taylor's superb covering tackle.

But the incident swung the momentum in Wales' favour and after a series of attacking scrums it was Roberts who blasted his way over from short range just after the hour.

Within minutes North cut an angle to beat five men as he raced in from 40 yards past some tired looking defenders.

Wales looked comfortable in the dying stages until Taylor's 79th-minute try meant they had to survive a re-start with a four point lead.

Man of the Match - Jamie Roberts

Many in Wales thought Roberts should have taken the award in Dublin and the Harlequins centre was to the fore again against Scotland, scoring a try, making 11 tackles and winning a turnover. There were also strong Scottish contenders in Seymour and Laidlaw. 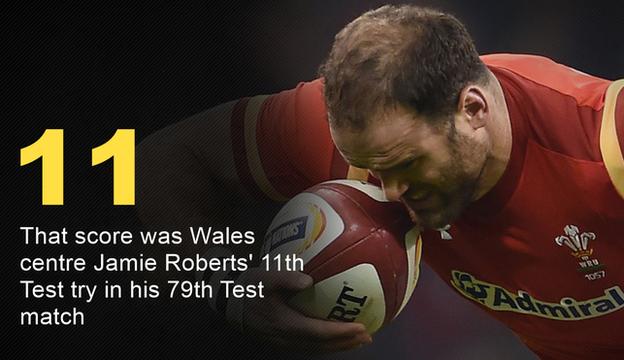 It is the return of Friday night rugby for Wales when France come to the Principality Stadium on 26 February with Gatland's team looking for a fifth consecutive win against Les Bleus.

For Scotland, it's Sergio Parisse's Italy in Rome on 27 February and a chance to avenge last season's 22-19 defeat in Edinburgh.