The 29-year-old Northampton player, who has been banned for a total of 54 weeks for offences such as gouging, biting and striking, succeeds Chris Robshaw.

"Dylan is an honest, hard-working bloke and I admire his aggressive and uncompromising approach to playing rugby," said England coach Eddie Jones.

Hartley said it was "a huge honour" to be named England captain.

Capped 66 times, Hartley became the youngest ever Premiership captain in 2009 when he took over the role at Saints. 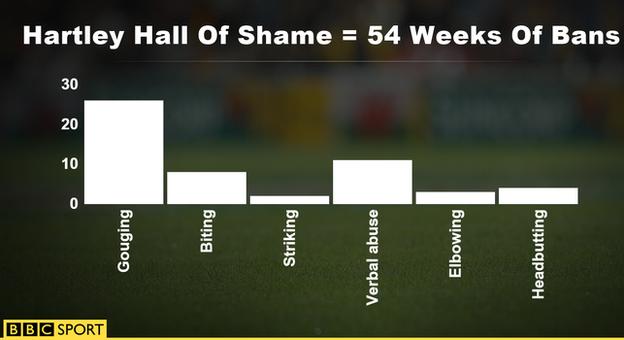 He has been sidelined with concussion and a rib injury but started for Saints in Saturday's European Champions Cup win over Scarlets.

Harlequins flanker Robshaw, 29, was captain for the past four years but came in for heavy criticism during England's poor World Cup campaign.

Hartley has revealed he thought his England career might be over after he missed the World Cup because of suspension.

He added: "I'm really excited about the challenge ahead but, in reality, leading this squad of players will not fall just to me.

"There are a number of guys in this squad who will all have important leadership roles to play so we can take this team forward."

Jones, who replaced Stuart Lancaster, added: "I have every faith he will lead the team tactically and passionately. English rugby is indebted to Northampton to have produced such a fine player."

"Since being appointed England coach, Eddie Jones has made it clear he will do things differently to Stuart Lancaster, and the appointment of Hartley as captain is a clear indication of this.

"Jones wants to build an aggressive, dominant and confrontational pack of England forwards, and he will hope Hartley can spearhead this, especially given there is a feeling England were 'too nice' during the World Cup.

"Clearly Hartley's disciplinary past will be an issue, and this move will be seen as the first substantial gamble of Jones' tenure. However Hartley's supporters will argue his track record in an England shirt is a good one, and he showed his leadership credentials when captaining his club Northampton to the Premiership title in 2014."