Fiji ended an encouraging World Cup campaign with a seven-try win over Pool A minnows Uruguay in Milton Keynes.

Nemia Kenatale and Leone Nakarawa, plus two penalty tries, helped the Pacific Islanders lead 26-10 at half-time, earning a bonus point before the break.

Uruguay had not scored a World Cup try since 2003, but Carlos Arboleya and Agustin Ormaechea crossed in each half.

Fiji eased away in the final quarter with three more tries, as Uruguay were reduced to 14 men as Ormaechea saw red.

Uruguay now travel to Manchester for their final pool match on Saturday against hosts England, who have also already been eliminated from the tournament. 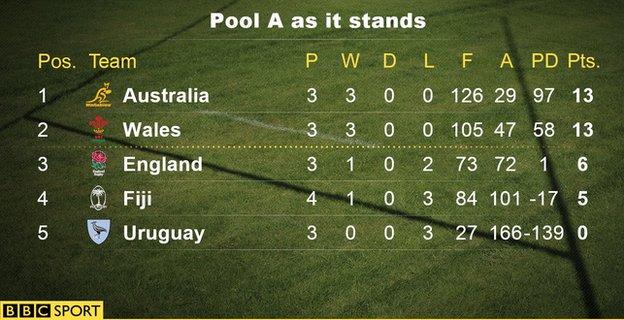 Can Fiji challenge the best?

Fiji always faced a tough task to reach the World Cup quarter-finals for a third time, having been drawn alongside Australia, England and Wales in the 'Group of Death'.

But there were encouraging signs in each of the three defeats against their illustrious opponents, with their trademark brand of rugby - unpredictable and free-flowing - complemented by tighter defence.

It meant they were expected to brush aside a Uruguayan side who had looked out of their depth in crushing defeats against Wales and Australia.

However, Fiji produced a patchy performance against the South Americans. Moments of attacking brilliance, particularly when second row Nakarawa dummied his way through to run in from 30 metres, were countered by lapses in concentration at the back.

Nevertheless, it was more than enough to earn a well-deserved first win of the tournament as Tevita Cavubati, Kini Murimurivalu and Nemani Nadolo crossed in the final 20 minutes.

Following two try-less defeats against Wales and Australia, Uruguay coach Pablo Lemoine set his team the task of scoring their first of the tournament against Pool A's other tier-two side.

In fact, Uruguay had not scored a World Cup try since 2003 - when Lemoine himself crossed the line in the 111-13 defeat by England.

And they managed to end that barren run when hooker Arboleya battered his way over the line from close range.

The moment sparked wild celebrations among the Uruguay camp - and the biggest cheer of the night from a record 30,048 crowd at a rain-soaked Stadium MK.

It gave Los Teros, who qualified for the first time since 2003 by beating play-off opponents Russia, renewed confidence against a Fijian side who have now conceded a try in each of their 28 World Cup matches.

Uruguay managed to double their try tally when Ormaechea spotted a gap to dive over after team-mate Andres Vilaseca kicked forward on the chase.

Scrum-half Ormaechea will miss Uruguay's final match against England on Saturday after becoming the first player to be sent off at the 2015 World Cup.

The 24-year-old was sin-binned for an illegal tackle leading to Fiji's first penalty try, then received a red card for reacting angrily to Cavubati's score.

"I am really proud of my team, it was a fantastic performance but we made two or three mistakes which cost us. I am pleased to see my record go and it is fantastic to score two tries. I think we were unlucky not to score more.

"I watched the TMO after Ormaechea's red card and I did not see anything there. We will have too wait for the result of the disciplinary officials.

"Against England we will try and play a tough game like we always do and do our best."