England are out of the World Cup after being torn apart by a superb Australia display at a stunned Twickenham.

Two converted first-half tries and four penalties from Wallaby fly-half Bernard Foley in a virtuoso display brought a richly deserved win on a black night for England's men in white.

The result means both Australia and Wales are into the quarter-finals.

It is the first time that a host nation has gone out at the group stage of the tournament.

And to complete their humiliation, it is also the first time England have failed to make the knockout stages. 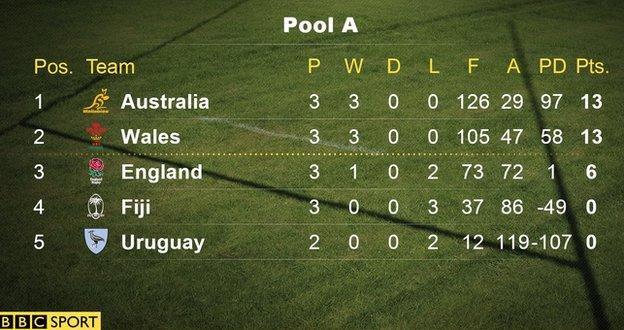 For England coach Stuart Lancaster it has been an awful World Cup, and questions will now be asked about his position, long-term contract or not.

His side have decelerated into this tournament and his selections fallen flat, his captain Chris Robshaw overwhelmed by the double-teaming David Pocock and Michael Hooper at the breakdown.

The Wallabies meanwhile will march on, as impressive on this night as any side so far and delighted to take revenge for defeat by England in their last three World Cup meetings.

England started uncertainly and only a desperate tackle from last man Mike Brown on Israel Folau denied the Wallabies an early try.

Folau then spilled a cross-kick on the try-line as he out-jumped Anthony Watson before both sides exchanged penalties, but on 20 minutes a series of yellow-shirted drives deep into England's 22 prised open the safe door.

England were stretched, Will Genia spotted a mismatch down the right and Foley stepped between Joe Launchbury and Ben Youngs before skipping inside Brown to dive over the line.

Twice England lost promising attacking positions on the opposition 22 to rapacious Australian turnovers, and five minutes before half-time they were torn open once again.

Off quick ball Foley accelerated onto Genia's pass, found Kurtley Beale on his inside shoulder and exchanged quicksilver passes to go clear for his second try, the conversion making it 17-3 at the break.

England were in quicksand, the Wallabies on fast-forward. When Foley's second penalty made it a 17-point lead the game looked gone.

But with George Ford on at fly-half - winger Jonny May's injury saw England shuffle everyone from Owen Farrell out one spot - England at last began to probe, and when Watson powered through two defenders down the right with 25 minutes left and Farrell landed the conversion from out wide there was at last hope.

England's replacements were making a difference, a Ford kick ahead setting up a Farrell penalty that made it 20-13 with 15 minutes to go.

But Farrell was then sin-binned for a dangerous tackle, with replacement Sam Burgess lucky not to be yellow carded for a worse hit milliseconds later, and Foley drilled over the penalty to kill that precious momentum.

A second penalty meant England were effectively out, and veteran Wallaby centre Matt Giteau dived joyously over in the last action of the match to twist the knife.

Wallabies fly-half Bernard Foley has sometimes been criticised for lacking the flair of his rival Quade Cooper, but he ran the show for his side and outshone his opposite number Farrell.