It actually happened. I checked. Oh to be a fly on the wall in that South African dressing room. Forget the game itself, that fly had the hottest ticket in Brighton.

When a coach has to apologise to a nation for the failings of his team, as Heyneke Meyer felt compelled to do after the Springboks' discombobulating 34-32 defeat by Japan, you know things have gone more than a little bit wrong.

They say rugby is a religion in South Africa. Well, at least they got a miracle.

A miracle as great as 'The Miracle on Ice', when a United States ice hockey team made up of amateur and college players beat the mighty Soviet Union in 1980? An upset as upsetting as when a team of part-time Americans beat England at the 1950 football World Cup? A shock as shocking as when John Daly won the 1991 PGA Championship at Crooked Stick, having been ninth alternate?

Maybe, because upsets of this magnitude are really not supposed to happen in rugby union; a game, according to accepted wisdom, taken seriously by only a handful of nations. And a handful of blessed nations who take it very seriously indeed.

Every four years, 'the minnows' are supposed to turn up at a World Cup, enjoy the festivities, take a damn good thrashing and earn a wee pat on the head for their efforts. Thanks for coming, off you pop, now leave it to us big beasts.

But the times they are a-changin'. And so it was that a team that is based largely in Japan, that lost to the United States two months ago, that beat Georgia 13-10 in their final warm-up game, that had won once in 24 matches spanning seven World Cups, shook your windows and rattled your walls.

Two-time World Cup winners South Africa boasted 851 caps between them going into Saturday's Pool B contest and while they failed to win a game in the recent, truncated Rugby Championship, they did get close to New Zealand and Australia.

Oh, and only three teams had beaten South Africa in a World Cup before - the All Blacks, the Wallabies and England. Given all that, it is hardly surprising that Japan went into the game as 66-1 underdogs, despite the fact they will be hosting the tournament in 2019.

To put that into some kind of context, before James 'Buster' Douglas knocked out the seemingly invincible Mike Tyson to win the world heavyweight crown in Tokyo in 1990, only one Las Vegas casino was willing to offer odds - at 44-1. 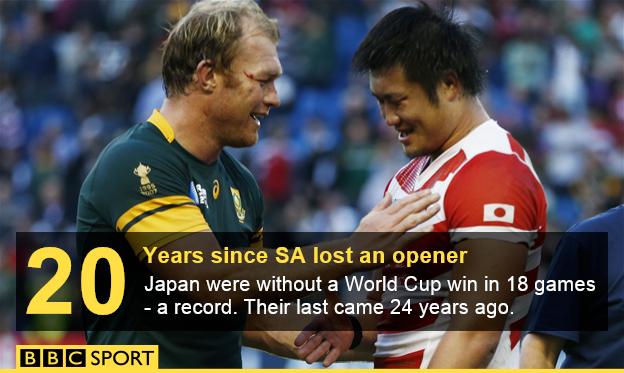 What Japan achieved against South Africa trumped Douglas's feat for a number of reasons. First, at least Douglas was in the same weight division as Tyson. Second, it would later transpire that Tyson's training had largely consisted of dalliances with the Japanese maids. Third, one newspaper did predict a Douglas victory, the Columbus Dispatch. Although, it should be noted, Columbus was where Douglas grew up.

Nobody in their right mind was predicting a Japanese victory over the Springboks. Indeed, it wasn't even a conversation worth having. Why bother with such childish fantasies? Get a couple of beers down your neck, sing a few songs and hope the Japanese score a consolation try or two.

People who weren't actually at the game wouldn't have bothered enquiring about the result. Indeed, in the pre-internet and social media age, you might have spent the rest of the day not believing it - just as many did when Douglas beat Tyson, before stumbling across the outcome on Ceefax. Just before bed.

The greatest thing about upsets is the sheer joy they bring. Laugh-out-loud, gob-smacking, fist-pumping joy (unless, of course, you are Meyer and his Springboks). And upsets also serve to remind us of what a wonderfully unifying force social media can be, that it's not all threats and bullying.

True, there was much mocking of the defeated South Africans on Twitter. But mainly people were thrilled for the Japanese. Except perhaps the Scots, who kick off their World Cup campaign against Japan in Gloucester on Wednesday. In case you are interested, Japan are currently 13-5 to win that one.

An awful lot of sport at the elite level is mundane and predictable. The big teams - with the big money, the big resources and the big traditions - usually win. Which is why 'The Bombshell in Brighton' felt so beautiful.

Japan's unlikely triumph has lit up the World Cup just when it needed it. Even those naysayers who had been predicting a month of woeful mismatches in the group stages might start tuning in. And it has shown Japan's fellow 'minnows' that big boys buckle too, if you hit them hard enough. Just like Buster did.