England were made to work hard by Fiji in their World Cup opener but pulled away in the last 20 minutes to secure a bonus-point win at Twickenham.

Two tries from full-back Mike Brown and the impact of a superior set of replacements saw Stuart Lancaster's men home despite a disjointed display.

Had the Fijians landed their kicks a tense contest could have been significantly tighter still.

England's next match is against Wales at the same venue next Saturday.

And despite a stuttering opening display, England have a platform on which to build as they seek to win the Webb-Ellis trophy for the first time in 12 years.

It was a match too often dominated by the television match official, meaning an atmosphere that rocked Twickenham in the early exchanges was punctured by long and frequent delays.

Rain before the start also checked both sides' ambitions, following an opening ceremony featuring Prince Harry, Jonny Wilkinson and Martin Johnson that had lit the fuse.

England will also be concerned by the number of penalties they gave away and the amount of problems their powerful opponents caused them at the breakdown and scrum.

Fiji provided exactly the sort of skilful, muscular test that defines their unique brand of rugby, with only their inferior fitness and lack of depth slowing their charge late in the game. 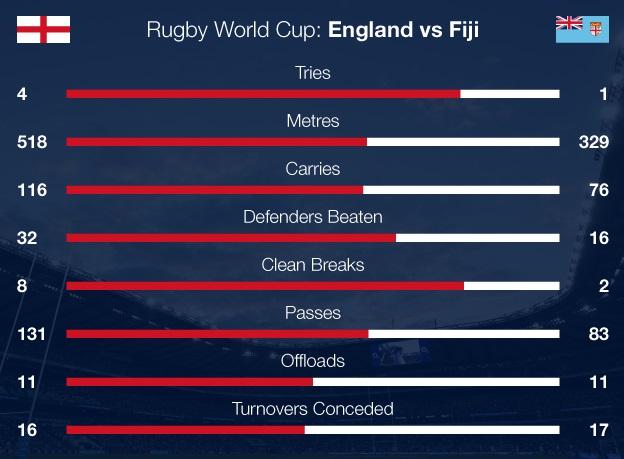 England accelerated into a 15-0 lead courtesy of an early George Ford penalty, a penalty try from a rolling maul and a Mike Brown score in the corner after Tom Wood stole a Fijian line-out five metres out and Jonathan Joseph's quick hands created space out wide.

But Fiji drove their way back into the contest as England, playing in their red change strip, struggled at the scrum and their ball-carriers failed to dent the white defensive wall.

Nikola Matawalu, sin-binned after England's penalty try, was denied a sensational breakaway try when television replays showed the scrum-half lost control of the ball in the act of touching it down.

But minutes later they did score. England's struggles in the scrum saw them turn over the ball on their own five-metre line and giant left winger Nemani Nadolo out-jumped Anthony Watson from Ben Volavola's precise cross-kick.

Had Fiji landed three straightforward penalties it would have been 18-17 with a quarter of the match to go, and there is no doubt England rode their luck before finally pulling away in the final quarter.

The hosts threw on the muscle of Billy Vunipola and Sam Burgess and looked for more control through replacement half-backs Richard Wigglesworth and Owen Farrell.

The Pacific islanders tired as the match stretched on and Brown was on hand to capitalise from Farrell's smart off-load before Vunipola smashed his way over in the last act of the game to secure what might prove a vital bonus point in such a tight pool.

But England will need to find greater precision as well as an authority that matches their ambition if they are to return here in six weeks' time for the tournament's final.

Man of the match - Mike Brown 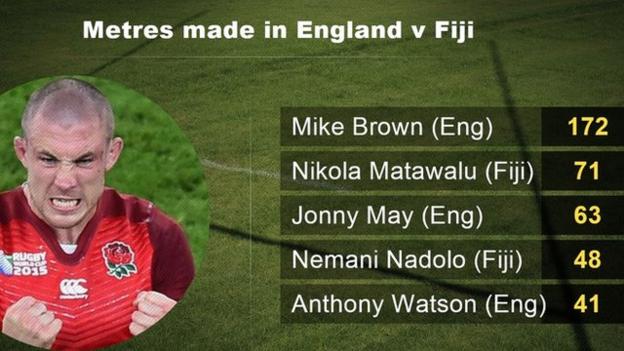 In a sometimes stuttering evening for the men in red, Harlequins full-back Brown was one of few to produce his best on opening night. In addition to running over 100m more than anyone else with ball in hand on Friday night, he also topped the defenders beaten (9) and clean break stats (4).

What they said - "massive relief" for Lancaster

England head coach Stuart Lancaster: "It was a big occasion and there were a few nerves. We had to work hard and that last try late in the game was a massive relief."

England captain Chris Robshaw: "The bonus point might be hugely important. We knew it would come down to the last five or 10 minutes because Fiji were hard to break down."

What the fans thought