Full-back Williams and tight-head prop Lee have not played in Wales' warm-ups.

Lock Jones injured a knee while leading Wales to a 16-10 win over Ireland last weekend.

Gatland said that is a "one-week" issue so Jones could face Uruguay in Wales' World Cup opener on Sunday 20 September in Cardiff. 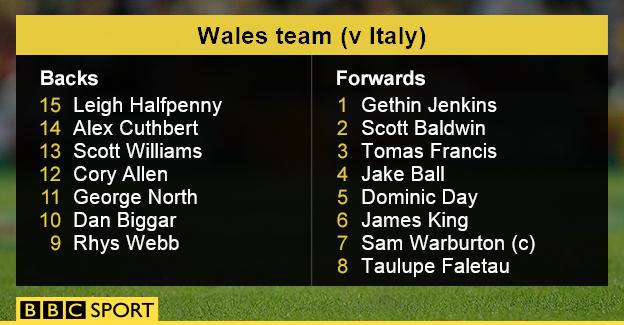 Williams underwent foot surgery in the off-season while fellow Scarlet Samson Lee has not played since rupturing ankle ligaments against Ireland in the 2015 Six Nations.

Gatland said: "They're all good… at the moment it's the fittest that we've been so Liam Williams is taking a full part in training next week, so he's there.

"I made a comment this morning - Samson Lee's full-out scrummaging in training so that's a huge positive so he's going to be fit and available, which is great.

"Alun Wyn's fresh and ready to go so it was sort of a one-week injury, but he's basically fit now."

Gatland also said tight-head prop Aaron Jarvis will cover the two hookers in the squad - Ken Owens and Scott Baldwin - if one is injured.

Tournament rules mean a player called into a squad because of injury cannot take the field within 48 hours of his arrival.

Gatland admits having only two specialist hookers is "a risk you take".

But he says title-holders New Zealand have done likewise by selecting only three recognised locks.

And Australia have also named only two specialist hookers in a pool that also includes Wales, Fiji, Uruguay and hosts England.

But he is on the bench as Sam Warburton returns from a shoulder blow to lead Wales in their final World Cup warm-up against Italy in Cardiff on Saturday.