North, 23, plays his first game since suffering concussion in March when Wales take on Ireland on Saturday.

"It's not about Wales as a team; it's the individual who is the most important thing. It's his health and making sure that's at the forefront of our decision-making," he said.

"I did express concerns recently that we've got to make sure things are right because if he does pick up one or two more serious knocks that could be the end of his career."

North suffered four blows to the head in a five-month period last season, and was knocked out playing for Northampton Saints against Wasps on 27 March.

That followed a concussion suffered playing for Wales against New Zealand in November 2014, and two knocks to the head that he took against England in the opening game of the 2015 Six Nations.

He was rested on the advice of a neurosurgeon, but will become the youngest player to win 50 Wales caps in the World Cup warm-up match in Dublin.

Gatland said he was satisfied with the way the player has been handled since his injury. 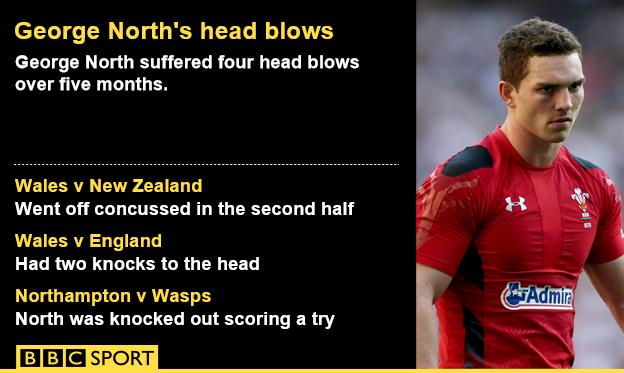 "He's followed all the medical protocols and we were very conservative in the way we approached and made sure that his welfare was paramount," Gatland said.

"Fingers crossed, but when you play this game it's physical. I don't think there's any player at this level who hasn't had a knock of some nature that hasn't jolted them a little bit.

"That's what happens in the game at this level and sometimes some players are more susceptible to it than others."

After Ireland, Wales have one more warm-up game against Italy in Cardiff on 5 September before starting their World Cup campaign against Uruguay in Cardiff on 20 September.