New Zealand great Jonah Lomu says the weight of expectation will be on fellow wing George North when he returns to action for Wales.

North, 23, has not played since March but is is to make his comeback from concussion when Wales face Ireland in Dublin on Saturday.

"The weight of the nation of the Welsh is on his shoulders," Lomu said.

"They are sitting there with bated breath waiting for him to get out on the paddock with his team-mates."

North suffered his fourth head injury in five months in March when he was knocked unconscious playing for Northampton against Wasps. 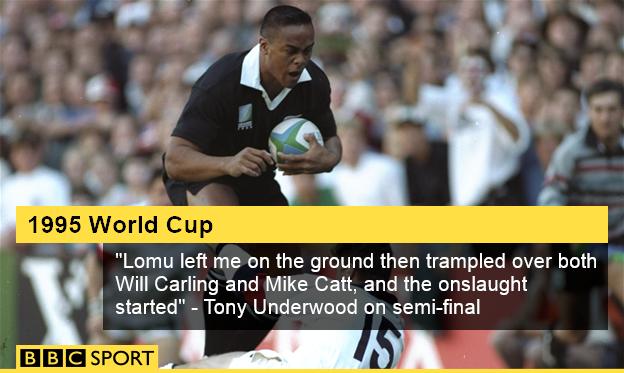 But the 2013 British and Irish Lion has passed all return-to-play protocols and has come through a training match with the Wales squad.

North did not feature in Wales' first World Cup warm-up match, a 21-35 defeat to Ireland in Cardiff on 8 August, will make his comeback in the return match in Dublin this Saturday.

"It will be fantastic seeing the big man out on the wing," Lomu said.

"I felt for the man. I don't know what it's like getting concussion because I've never been knocked out, even though I've been kicked and ran into a few knees I came out the other side.

"That's part and parcel of the game but the powers that be have put stringent laws in there and player welfare is always number one."

The 6ft 5in and 18 stone player broke the mould for rugby union wings and became one of the game's most recognisable figures.

His place in rugby folklore was cemented by a barn-storming performance in the 1995 Rugby World Cup semi-final, as New Zealand crushed England 45-29 in a match that saw Lomu brush aside English backs Tony Underwood, Will Carling and Mike Catt on his way to the line for one of his four tries.

But New Zealand would lose to underdogs South Africa in the final and Lomu warned that having a great wing in a team is all very well, but his team have to win enough possession first.

"It's all well and good having great wingers but you've got to get the ball and it's the guys up front that do the job, and we'll try and finish it off for them," Lomu added.

After taking on the Irish at the Aviva Stadium, Gatland will trim his squad to a final 31 on 31 August.

Wales then have one last warm-up game against Italy on 5 September in Cardiff, before beginning their World Cup campaign against Uruguay on 20 September also at the Millennium Stadium.

They then face England, Fiji and Australia in arguably the most difficult of the qualification pools, with only the top two advancing to the semi-finals.