Clermont Auvergne may not be in their Stade Marcel-Michelin stronghold where they have not lost a European match since 2008, but at St Etienne's Stade Geoffroy-Guichard they will still pose a formidable barrier to English hopes of a first tournament winner since Wasps in 2007.

Equally, Irish province Leinster face a similarly gargantuan task if they are to stop two-time defending champions Toulon marching into a third successive final when they face the French arrivistes on Sunday at Marseille's Stade Velodrome.

Saracens are in their third successive semi-final, having lost to Toulon in the last four two years ago, and the same opponents in the final last season.

Clermont's last two defeats in the competition have both been at the hands of Saracens, including a record-breaking semi-final loss on Sarries' 'home' turf at Twickenham 12 months ago, but a third reverse seems unlikely.

Beware the Englishman spurned by his country 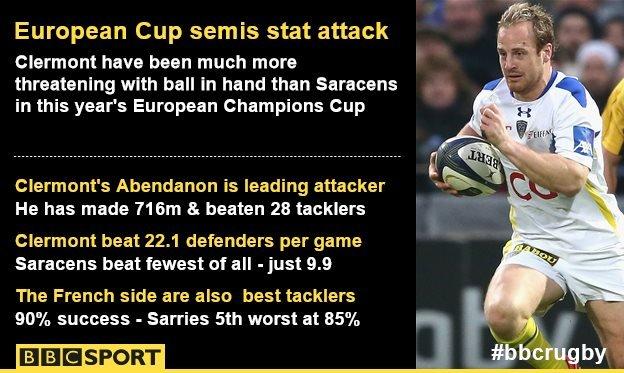 Former Bath full-back Nick Abendanon was the star of Clermont's crushing 37-5 quarter-final win over English champions Northampton a fortnight ago.

Saints ran into a side that, for the first half at least, were playing as well as any side you'll see this season. Saints couldn't get into the game, despite the quality they have.

Abendanon is playing in an incredibly strong side alongside world-class backs such as Wesley Fofana, Noa Nakaitaci and Napolioni Nalaga but he is more than holding his own and is looking comfortable, which is great.

He doesn't appear to be hanging on, he looks like he is leading and taking his opportunity. Given Clermont's forward power, and the backline they possess, it would be a crying shame if someone like him couldn't thrive in that environment.

Even in tight games, Abendanon's skill-set often stands out because he can turn a nothing situation into something in the blink of an eye and he is away, either creating or scoring a try.

He is a tricky, quick, elusive rugby player and people want to see him play. I much prefer to see those silky runs, great dodging and side-steps than I do the big hit.

Don't get me wrong, it's nice from time to time but a big hit doesn't get people off their feet. It just produces a sharp intake of breath. But generally the sort of tries Abendanon scores, you see him materialising from 40 yards out so you're already on your feet.

The likelihood of Nick getting back in the England squad is far from definite because no matter how well he plays, he still has Mike Brown and Alex Goode ahead of him, and Anthony Watson who can cover full-back as well. But it's certainly great to see another Englishman thriving in a French team.

Witness the benefits of an Englishman dropped… and then revived

Saracens might have had to do without Billy Vunipola when he was cited after last weekend's Premiership win over Leicester, but the strapping number eight was cleared of striking Mathew Tait.

The way Saracens are built, they would have gone about business as usual if Vunipola wasn't available, but it's a huge bonus for them that he is.

He was dropped by England in the autumn in favour of Ben Morgan, but he realised what he had to do, he's gone away and come back and done it throughout the Six Nations.

He knows what he needs to do to be better, and has been re-thinking and re-evaluating himself as a player. Saracens are benefitting from it now and England will continue to benefit with a hard World Cup to come in the autumn.

The fitter Billy Vunipola is, the more damage he can do and the more effective he can be in a game. Without doubt his presence is a huge plus for Sarries and they'll be a happier team going out to face Clermont with him in it.

And what about another Englishman fallen on slightly harder times?

Owen Farrell will start on the bench as he makes his return to action having been out since January.

He's a great talent and as with other smart, young players, you've got to take the right advice and learn from these experiences.

George Ford, who has established himself as England's fly-half in Farrell's absence, could have hidden his injury and gone on tour to New Zealand last summer. But he wisely chose to have a shoulder operation, get the right rehab and have a full pre-season. He has certainly benefited.

Owen sustained some injuries in New Zealand - it took him a bit of time to come back from them and when he did in November his form wasn't great. In most observers' eyes, we saw a player not at his best, and he then got injured again,

So could Sarries spring an upset in St Etienne?

Clermont are bang on at the moment and more in tune with the European Cup. I think they are just going to edge it by a try or a penalty.

And I predict an all-French final. Toulon have a team of world-wide international stars and it will take a really good side to beat them.

Leinster did win the old Heineken Cup three times in four seasons (from 2009-2012), but I'm going for a Toulon win.