Sam Warburton will lead an unchanged Wales team against Ireland in the Six Nations Championship in Cardiff.

"It's a fantastic achievement in professional sport and especially in rugby because it's such an attritional game.

"In the past Sam has had a few injury issues and he's been able keep his body together pretty well at the moment and it's just a fantastic achievement.

"And Surpassing someone like Ryan - who did a fantastic job for us when he was in charge as captain - is a great accolade for Sam and we just hope as a team we are able to reward that achievement with a good performance on Saturday."

Wales lost their opening match of the tournament 21-16 to England. 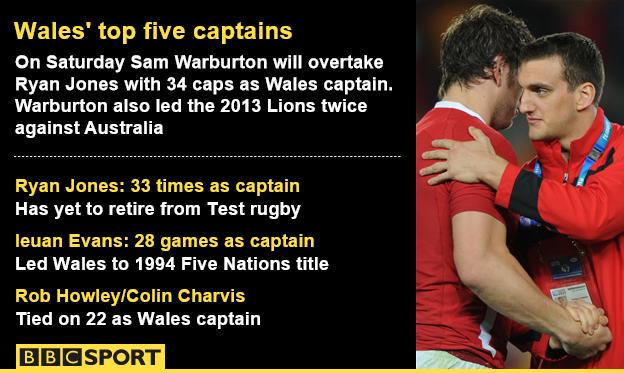 But they recovered to win 26-23 against Scotland at Murrayfield and were comfortable in beating France 20-13 in Paris.

Ireland were unconvincing in their opening win over Italy, but then toughed-out a home win over France and maintained their Grand Slam hopes with a 19-9 win over England in Dublin last time out.

Wales made changes after the defeat against England and changed four players in the starting XV against France in spite of beating Scotland.

"We were disappointed with the last 20 minutes against England and made changes, and that team performed well against Scotland," added Gatland.

"But we made changes against France to look at other players and they played well and they've been rewarded.

"We return to the Millennium Stadium after two tough away trips with two victories and will be looking to build on that.

"Ireland are the form team in Europe and we know it is going to be a huge battle."