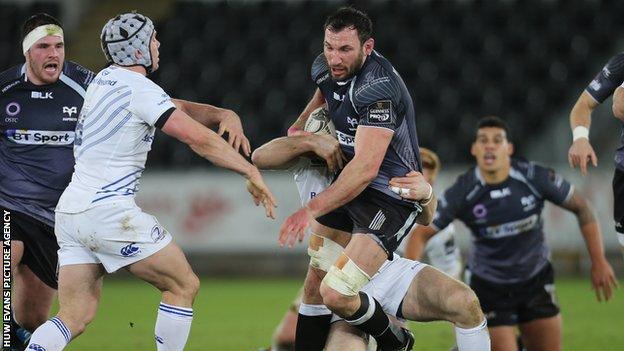 Leinster moved up to third in the Pro12 as Jimmy Gopperth's late penalty denied Ospreys in a game dominated by kickers.

The Ospreys' points came by way of two penalties and a drop goal from Sam Davies after two Gopperth penalties had put Leinster ahead.

The hosts were 9-6 up going into the final 90 seconds, when Morgan Allen was penalised at a ruck and Gopperth kicked a last-gasp penalty.

Leinster suffered a setback before the game when Jack Conan rolled his ankle in the warm up which resulted in Dominic Ryan starting at number eight.

In a pretty uninspiring first half, that was dominated by an aerial kicking duel, Leinster led by the interval by 6-3 despite not entering Opsreys' 22 once.

Leinster's dominance came through a strong scrummage, but it was the Ospreys who enjoyed much more territory.

After a series of dull kicking exchanges it was Leinster who took the lead with two Gopperth penalties on 15 and 23 minutes.

Ospreys went through the phases on a couple of occasions as they entered the Leinster 22, but the Irish team's defence held firm.

That was until the end of the first half, when Ospreys broke their duck with a penalty goal for Davies from inside the 22.

Davies was on target again two minutes into the second half with a drop goal from an encouraging Ospreys attack before following that up with a 55th-minute penalty to take the home side into the lead for the first time.

The Ospreys looked like they were heading for a win and fourth place in the table in a game that never really looked like producing a try.

But the ever-reliable boot of Gopperth ensured Leinster returned home with something, leaving the Ospreys fans unhappy with their points return.