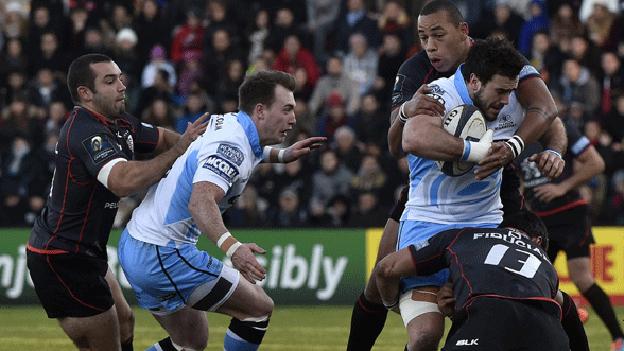 Glasgow Warriors failed to build on a promising start as Toulouse overpowered the visitors to take over at the top of European Champions Cup Pool Four.

And a try from Maxime Medard caught Glasgow cold in the opening minutes of the second period.

It means that, if Gregor Townsend's men are to qualify from the group stage for the first time, they may need to exact revenge on the four-time champions when they meet again at Scotstoun in six days.

To have any chance of doing that, their discipline must improve.

Glasgow dominated territory for the first half hour, with Alex Dunbar and Nakarawa prominent, but the visitors could not find a way through the home defence.

Toulouse enjoyed the upper hand at the scrum throughout and an infringement allowed Bezy to kick the first points of the game.

Russell levelled as Glasgow continued to take the game to the French, although there was a huge let-off for Warriors when Gael Fickou wriggled free.

A score under the posts looked inevitable when he popped a pass towards Imanol Harinordoquy, only for the veteran number eight to fumble under little pressure.

Then came a major turning point when Russell was sin-binned for a dangerous tackle on Jean-Marc Doussain, with the fly-half perhaps fortunate to avoid a red card for dumping his opposite number in reckless fashion.

Bezy knocked over a second penalty and a third soon followed as Toulouse began to throw the ball around, with Glasgow hanging on grimly when the interval arrived.

Toulouse picked up their only try in the opening minutes of the second half as Rob Harley was stripped of the ball and a slick move culminated with Doussain kicking though for Medard to touch down in the corner. Bezy added the extras.

Glasgow rallied again briefly, with Russell landing another penalty, but that second wind was short-lived as Nakarawa was shown a yellow card for collapsing a maul on 62 minutes and Bezy sent the ball sailing between the posts again.

The depleted visitors were now being outmuscled in most departments and Louis Picamoles raced towards the posts but straight into Russell, who did well to hold on to the charging flanker.

More brave tackling was required from Glasgow to repel wave after wave of attacks from the men in black.

In the closing minutes, Townsend's men made the scoreline a little more flattering as captain Josh Strauss broke down the left wing and a forward pass went undetected as Matawalu raced clear to score.