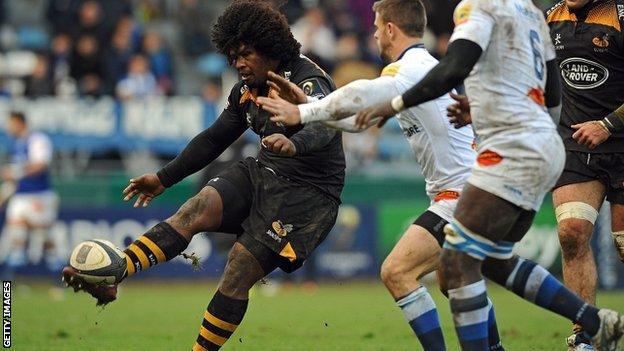 Wasps earned a bonus-point win over Castres to boost their hopes of reaching the quarter-finals of the European Champions Cup.

The visitors led 15-14 after an entertaining first half, in which both sides looked to play expansive rugby.

Castres, bottom of the French Top 14, stayed in touch for most of the second half but a late penalty try and a score by Sailosi Tagicakibau were conclusive.

Dai Young's side host Castres next Sunday and another victory would further enhance their chances of advancing from Pool Two.

Full-back Rob Miller scored the visitors' first try after only five minutes, touching down after a clever kick through by Tom Varndell.

Castres hit back a few minutes later, hooker Mathieu Bonello shrugging off three Wasps defenders before burrowing over for a try.

But two-time European champions Wasps were ahead again almost immediately, number eight Nathan Hughes going over in the corner after a deft pass under pressure by Ashley Johnson.

Castres' South African-born scrum-half Rory Kockott hit the crossbar with a long-range penalty before pulling a more straight-forward three-pointer left of the posts.

Wasps fly-half Andy Goode kicked a penalty to increase the visitors' lead to eight points, only for the hosts to come rumbling back again, centre Remi Lamerat burrowing over after a line-out drive.

The second half began in frenetic fashion, with breaks, missed tackles and handling errors to the fore.

Thomas Combezou thought he had given Castres the lead after 50 minutes but his try was disallowed because of obstruction, before Kockott made another mess of a penalty attempt.

Julien Dumora did put the hosts in front with his boot with 13 minutes remaining but it was the visitors who finished by far the stronger.

Wasps were awarded a penalty try when Sitiveni Sivivatu went in high on Varndell and was sent to the sin bin, before Tagicakibau crossed late on.

Wasps director of rugby Dai Young: "We're very happy. Castres are a great side. They aren't having a great season, but they're normally up there in the Top 14, so to come here and get a victory is very special.

"We've got Harlequins again, we've got Leinster again - these are all quality sides, so let's just take it one step at a time. Let's take the positives and the learning out of today and look forward."